By Sophie Bouillon with Emmanuel Anule in Abuja
Nigeria 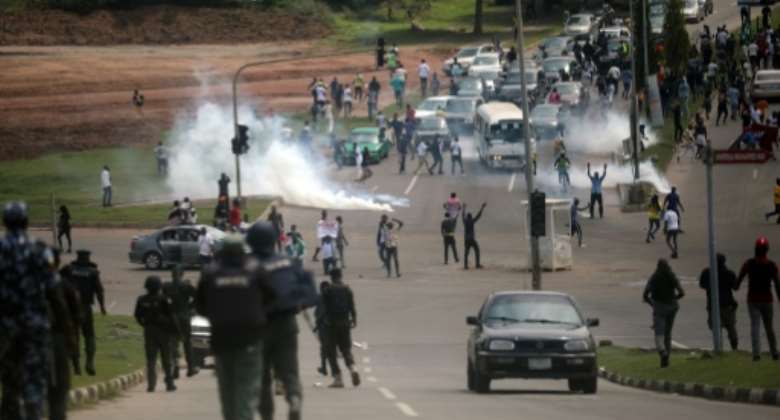 Protests that began 12 days ago over abuses by the Nigerian police's loathed Special Anti-Robbery Squad (SARS) have spiralled dramaticallyÂ . By Kola Sulaimon (AFP/File)

Authorities declared a 24-hour curfew in Nigeria's economic hub Lagos on Tuesday as violence flared in widespread protests that have rocked cities across the country.

Lagos state governor Babajide Sanwo-Olu announced only "essential service providers and first responders" would be allowed on the street from 4 pm (1500 GMT).

"I have watched with shock how what began as a peaceful #EndSARS protest has degenerated into a monster that is threatening the well-being of our society," he wrote on Twitter.

"Lives and limbs have been lost as criminals and miscreants are now hiding under the umbrella of these protests to unleash mayhem on our state."

Protests that began 12 days ago over abuses by the police's loathed Special Anti-Robbery Squad (SARS) have spiralled dramatically.

Lagos, a city of 20 million, has been paralysed as crowds have blocked key roads and access to the international airport.

They were not carrying the placards and signs that have characterised earlier peaceful protests.

Witnesses told AFP that a police station was set ablaze in the Orile Iganmu district of the city on Tuesday. They said police opened fire on the protesters, wounding several.

In the capital Abuja on Tuesday, security forces violently dispersed crowds and thick black smoke could be seen over the city, an AFP photographer said.

Tensions were high after reports of three deaths in the city during unrest on Monday.

"The command has launched an investigation into the matter and normalcy has been restored to the area," said police spokesman Mariam Yusuf.

"However, about three persons were reported dead and some cars damaged."

There was a heavy presence of security forces at a market selling spare parts where cars and shops had been torched Monday.

Angry vendors gangs of young men had caused the damage.

The government announced the scrapping of the SARS unit and a raft of reforms over a week ago in a bid to placate the protesters.

But many of the young demonstrators are sceptical of government promises and they have begun to demand more sweeping changes.

Officials have called for protesters to suspend the demonstrations to give the government time to make good on its pledges.

Nigeria -- where the median age is 18 -- is a tinderbox of profound economic and social frustrations.