Glory In A Mess Sanitation: Who To Call? 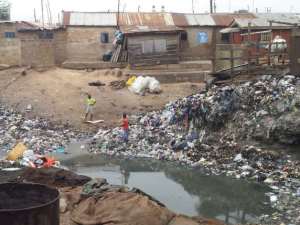 A call to keep I have; Kwame Nkrumah, the first President of the republic of Ghana once said, ‘If change is denied, or too long delayed, voilence will break out here and there. It is not that man planned or willed it, but it is their accumulated grievances that shall break out with volcanic fury.’

With much social talk and commentary, it really seems investments in sanitation in Ghana are generally not prioritized.

Under most government regimes in Ghana, urban authorities are called upon to devise policies and interventions to properly manage the generated waste.

Most recently the government’s Sanitation Policy (SP) requires metropolitan, municipals and district assemblies (MMDAs) to see to the sanitation needs of all communities and households notwithstanding the markets. In reality, however, there is limited awareness and low participation and involvement among citizens in addressing sanitation. And in addition to low prioritization of sanitation issues, there is also limited budget allocation and limited collaboration among stakeholders and duty bearer in making this reality resulting in our cities engulfed in dirt most importantly the market from which our food is bought from- a disaster for our health.

The citizenry was charged by Nana Addo Dankwa Akuffo in his speech on the eve of clamming the seat of government not to be spectators reminds me of the song ‘A charge to keep I have; a country I have to boldly stand to defend.

On 15th October, 2020 Global Hand Washing Day; I took the chance to walk through the Ashaiman market (one case same as most of the 260 MMDAs) and what I saw was actually not good for a city that proud itself as the cleanest city. One would ask how we got here. But I ask what was not done right? Is it the failure of the institution or the citizenry who don’t know what they really willed in their hand?

A further check revealed that the gutters are heavily chocked resulting to spillage in the market. Though they say the issue is known to the authorities for some time now but nothing has still been done to salvage the situation and the poor market women who pay tax to this same assembly. This gutters for so long has not been desilted. Duty bearers who have been paid from the same proceeds gotten from the market have neglected this women at the mercies of the weather.

Rains are setting in this days and it is only God who knows how this women will survive. Understanding of the good hygiene practices reduces the health risks from poor sanitation and waste management in our market cannot be over emphased if poor sanitation manners are not handle quickly to avert some of the possible disease the public might contract as a result of that attitude.