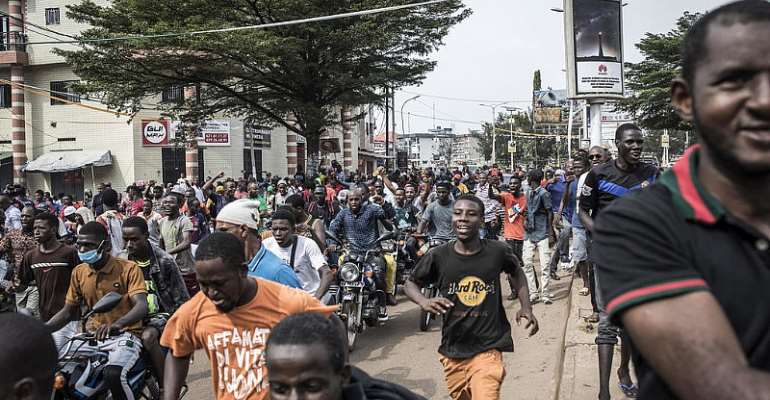 At least three people have been killed and several others wounded on the streets of Guinea's capital Conakry after main opposition leader Cellou Dalein Diallo declared himself the winner of Sunday's presidential election.

"I invite all my fellow citizens who love peace and justice to stay vigilant and committed to defend this democratic victory," said Diallo on Monday from his party headquarters in Conakry.

Supporters of his Union of Democratic Forces of Guinea took to the streets in strongholds of the capital to celebrate the self-proclaimed win, which came in the middle of vote counting across the country.

The victory dance was short-lived, however, as members of the security forces were quickly called in to maintain order, firing tear gas and in some cases live bullets to disperse jubilant crowds of mainly young people.

Gunfire was heard throughout the night in opposition strongholds in Conakry.

Diallo claims he won the election with over 50 percent of the vote, saying President Alpha Conde scored a little more than 30 percent of votes.

According to Guinea's electoral code, only the electoral commission has the right to announce preliminary election results.

Diallo accused the electoral commission of planning to falsify the election results in an area he had won to enable the president win.

In central areas of the country, fighting reportedly broke out between supporters of the two parties.

In Kissidougou, a town about 600km from Conakry, supporters of Diallo were accused of having attacked supporters of the ruling RPG party.

Shops and other materials belonging to Diallo supporters was said to have been destroyed. The authorities said they were trying to restore order.

A combined team of United Nations, regional group Economic Community of West Africa States (ECOWAS) and the African Union were in Guinea days before the election to call for peaceful and transparent elections.

The commission also warned the 11 candidates against prematurely proclaiming themselves winner of the elections.

Electoral commission spokesman Mamady Kaba said the body will not distracted by Diallo, whose declaration was described as “baseless, illegal and dangerous”. They are carrying on with their work and they will soon announce the preliminary election results said the statement.

Sunday's elections passed off peacefully, with no reports of violence until polling stations closed at 1800 hours.

President Conde, is running for a controversial third term in office, after he changed the constitution in a referendum in March to allow more than two presidential mandates.

It's the third time Diallo is challenging Conde for the presidency. In 2009 he lost to him in the second round of elections. In 2015 he didn't make it to a run-off vote.

Elections in Guinea have previously been marred by violence along tribal lines between Fulanis, who usually support Diallo, and Mandingos, who back the incumbent.

Diallo's early claim of victory has stoked fears of a new conflict between the two after official election results are announced.