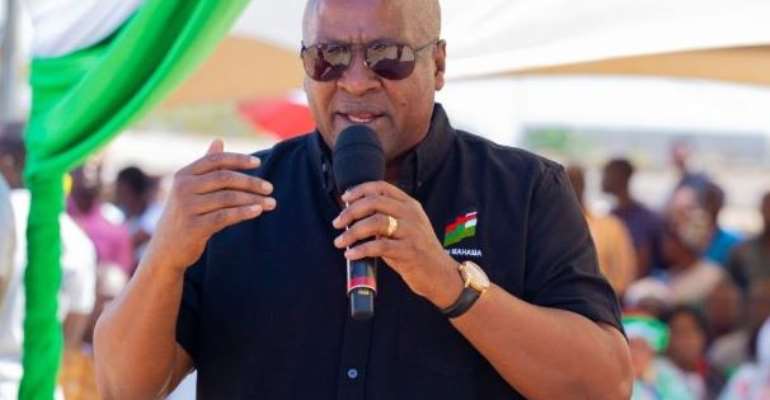 Some of us were taken aback when former President Mahama stated during his interview on Asempa FM on Monday 19th October 2020 that he managed to end the unspeakable dumsor in February 2016 before exiting power.

Well, I am not sure whether the unspeakable dumsor left the scene in February 2016 as former President Mahama would want us to believe.

In fact, I was in Ghana in June 2016 and dumsor was a thorn in the flesh of the good people of Ghana.

Back then, the then running mate of NPP, Dr Mahmoud Bawumia, made it clear to the good people of Ghana that the dumsor was as a result of financial constraints due to Mahama administration’s unpardonable economic mismanagement.

As it was expected back then, the NDC faithful vehemently and needlessly repudiated Dr Mahmoud Bawumia’s exposition. It would appear that the Mahama’s government did not take the dumsor as a priority area.

Dearest reader, tell me, if the dumsor was a priority area for Mahama administration, how come the outgone NDC government rather paid dubious judgement debts to a tune of GH800 million instead of purchasing fuel to generate power?

Interestingly, in the 2013 World Bank’s Enterprise Survey on African economy, with special emphasis on Nigeria and Ghana, the report concludes that ‘dumsor’ (erratic electricity supply) is the biggest obstacle to the economic growth in Africa and hindrance to multi-national investors (World Bank 2013).

Evidently, however, in the gloomy days of dumsor under Mahama’s administration, amid plangent buzzing of generators all over the country, most businesses folded up amid massive unemployment.

In those days, self-employers like Hairdressers, Ice Kenkey Sellers, Butchers, among others, were the worst affected.

The revoltingly annoying and costly buzzing of generators across the length and breadth of the country, unfortunately, went on for well over five years to the utter dismay of the good people of Ghana.

We cannot also deny or ignore the fact that for well over five years, Mahama’s dumsor unfortunately crippled businesses as a result of the mismanagement of the economy.

Given the circumstances, we can understand how and why some concerned Ghanaians, including some supporters within the NDC have been expressing their arousing disgust over former President Mahama’s desperation to return to the presidency after being voted out massively in 2016 due to his abysmal performance.

Apparently, the sceptics insist that Mahama was not up to the task during his tenure in office and therefore do not expect discerning Ghanaians to forgive and forget his dreadful errors in judgment and vote him back to the presidency in 2020.

Disappointingly, however, in his desperation to solve the serious problem such as dumsor, Mahama administration ambivalently sign a superfluous ‘Take or Pay’ Power Purchasing Agreements (PPAs) in which Ghana is needlessly paying over $600 million per year for extra power we do not need.

By gleefully signing the excessive Power Purchasing Agreements and entering into a calamitous ‘Take or Pay’ deal, Ghanaian consumers are unfairly being forced to pay exorbitant electricity tariffs as a result of the Mahama government’s negligence.

Shockingly, though, given the fact that dumsor massively affected the businesses of the diehard supporters of NDC, it is quite ironic that the same people are clamouring for the return of someone who wilfully collapsed their businesses through erratic electricity supply (dumsor). How ironic?

Truth be told, it is only the brassbound NDC supporters who will refuse to recollect the negative effects of Mahama’s dumsor on Ghana’s economy.

In ending, some of us, as a matter of principle, are not oblivious to the negative effects of dumsor, and therefore we are well-aware of the apocalypse of Mahama reclaiming the presidency.