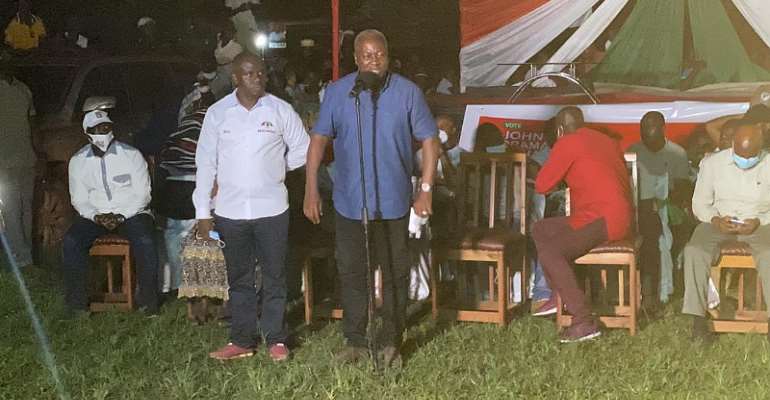 The former President said this while addressing a durbar of chiefs and people of Sameraboi in the Amenfi West constituency on day one of his four-day tour of the Western Region.

Mr. Mahama explained that abandoning uncompleted school blocks started by the Mahama administration brought about the double-track system which is compelling a lot of parents to spend more on extra classes for their wards due to less classroom time for students.

“What is sad is that, when we started the progressive free-SHS, we foresaw that the students’ numbers will increase. This prompted us to start the building of 200 secondary schools across the country including one at Sameraboi, where we are now.”

“If these schools that have been left in the bush to go waste had been completed, we wouldn't be having this destructive double-track system that lasts for three months for our students. Today students spend close to three months staying in the house because of double track and go back to school without any memory of whatever they were taught.”

The NDC flagbearer also argued that the long vacation brought on by the double-track system also posed a serious threat to the safety of students.

“When a parent is not lucky, his or her girl child could be destroyed by somebody because of her idleness in the house instead of staying in school. Again if the student is a boy and the parent is not lucky, he could easily join bad company or fall in the hands of bad peers who could introduce him to criminal activities thereby creating problems for the parents.”

Mr. Mahama also promised to fix all bad roads in Sameraboi if he wins the 2020 election.

He also appealed to the people of Sameraboi to vote for Eric Afful as their MP.

Nana Kofi Yeboah, who is the Chief of Tanokrom, speaking on behalf of the chief of Sameraboi, thanked the NDC flagbearer for his assurances and appealed to him to come to their aid when voted into power.

Earlier, Mr. Mahama told the chiefs and people of Asankragwa to continue to support the NDC to come into power to better the Cocoa Pension Scheme which was initiated by the NDC.