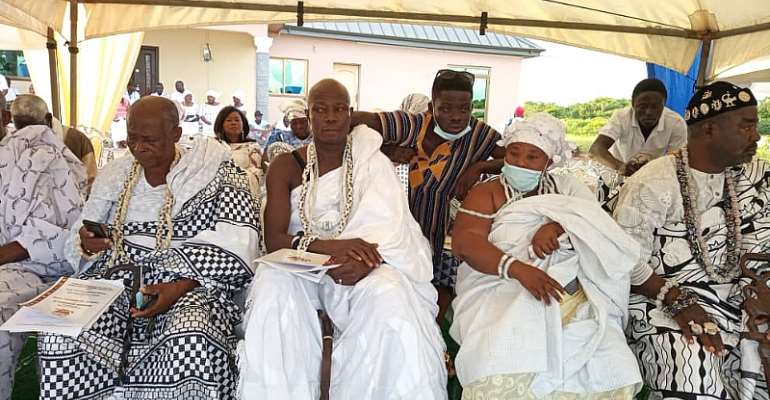 The Chief of Gefia in the Akatsi South District of the Volta Region, Torgbui Korbadzi III, over the weekend has said for rapid community development, the role of Chiefs should not be underrated.

Torgbui Korbadzi made this statement during a ground durbar of chiefs and people of Avenor to mark his first anniversary as Dufia of Gefia.

Torgbui Korbadzi III in giving an account of his stewardship since his installation as Dufia of Gefia, stated that he supplied 11,000 capacity poly tank to the community to help replace a defaulted poly tank that served as a reservoir for the mechanised borehole drilled by the Member of Parliament, Hon. Bernard Ahiafor.

In Torgbui Korbadzi's concluding speech he said "Regarding the challenge in getting enough potable water to my subject in Gefia, the Korbadzi Royal Family is putting steps in place to increase the water generating capacity and to provide distribution plan to enable people to have water connected to their homes very soon. This project will need the support of all citizens of Gefia to make it successful".

The District Director of CHRAJ, Mr Michael Tormeti who gave the Keynote address on the theme: "Accelerated Community Development: The Role of Traditional Authorities stated," stated that peace and Unity is a necessity for accelerated community development and the performance of this role is key in the functions of Chiefs and Queen Mothers.

The Chairman of the Celebration Torgbui Tenukpo Azadagli III of Tadzewu encourages the citizenry to rally behind their Chiefs to revive the spirit of communalism which is dying out from our community.