Over 7,000 GAF Civilian Employees, Families Threaten To Vote Against Akufo-Addo 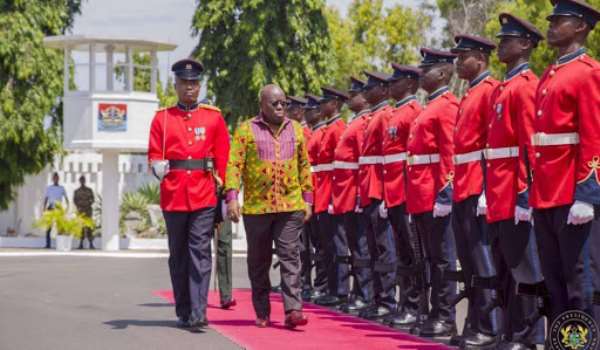 The Civilian Employees of the Ghana Armed Forces (GAF) have threatened to punish President Akufo-Addo and the ruling New Patriotic Party (NPP) in the December 7 polls if government fails to better their conditions of service.

The workers who pleaded anonymity for fear of victimisation told ModernGhana News that the only option they have is to vote out the Akufo-Addo and his government.

According to them, this has become necessary due to the adamant nature of the Armed Forces Command after they threatened to stage a demonstration to drum home their demand.

They say they had to suspend their intended demonstration following warnings that the Armed Forces Command has laid ambush and vowed to deal with anyone who leads any demonstration over the matter.

A source familiar with the matter said even as they find legitimate means to draw the attention of the relevant authorities, a careful scrutiny of the manifestoes of both the NPP and opposition National Democratic Congress (NDC) reveals that the Akufo-Addo careless about the welfare and progress of Civilian Employees.

While they applaud the opposition NDC for detailing plans to better the conditions of service of Civilian Employees, the NPP manifesto has said none about them.

This and many other signals from the hierarchy of GAF they say, suggest that 'they can go to hell.'

Another source told this reporter that a very short durbar was recently held to inform the Civilian Employees to calm down but no effort is seen at addressing their demand. The source added that government has also approved additional 20 percent salary increase for soldiers which was supposed to be paid this month but for fear of agitation from the Civilian Employees government is holding on to the 20 percent increase for the soldiers.

"A large number of the staff of the Ghana Armed Forces are civilian employees. They are specialized in many professional fields such as Medicine, Administration, Accounting, Engineering, Pharmacy, Surveying, Statistics and many more. Only a few of them are manual or unskilled workers.

"Much of the day to day work of the Ghana Armed Forces is done by Civilian Employees but they have never been treated fairly as far as remuneration and other conditions of service is concerned. Civilians at the various Infantry of the armed forces work their hearts out but goes home every month with virtually nothing, whiles soldiers smile to the bank every month," the source intimated.

Sources indicated that Civilian Employees who work at the military hospitals, for example, do the same work which includes surgery, nursing, pharmacy, accounting, administration just like their uniformed military counterparts but are paid 50per cent lesser than the military personnel.

"Imagine a consultant goes into the theatre with a newly qualified specialist who is still learning under the consultant, and surgeries are performed throughout the month, only to be paid far lower than your subordinate just because he wears a military uniform. The phenomenon is widespread in all professions within the Armed Forces.

"Early this year, the government increased the salary of military personnel between 40% and 60% but left civilian employees with totally nothing! Didn’t the constitution say equal job should attract equal pay? So why did the president ignore the Civilians Employees and only cared about the soldiers? When you’re sick and come to hospital, do you ask to be attended by military personnel? So why treat them so?

"Mr President, it will interest you to know that a back pay due Civilians Employees which you ordered that it should be paid has still not been paid. Six years back pay was refused them with the excuse that the finance minister, Ken Ofori-Atta doesn’t want to pay," the source lamented.

The source continued, "Civilian Employees have a welfare into which each of them is deducted from source and paid into that welfare account but nobody accounts to them how the money is used. This welfare account is not managed by the Civilian Empoyees but a soldier! They’re not accountable to the civilians, what kind of opacity and mistreatment is that?"

Sources at the 37 military hospital indicated that civilian senior staff were made to pay GhC30 as Mess dues. "A Mess that is supposed to be for military persons, why should civilian staff pay for the enjoyment of military persons? Again, every year senior civilian staff are taxed Ghs 200 for annual ball (party) after working for a whole year, the military takes money from them to do a party most of the civilians don’t even attend. When it has to do with deducting money from them, they will say everyone is a military staff but when it is something that will benefit them, then the discrimination starts.

"The civilians have threatened to go on demonstration but the High Command has called a durbar and made some empty promises to the civilian workers who were not convinced. They are threatening to vote heavily against the government if they don’t get a raise before the end of November, since they are being targeted and monitored by the Command for victimization.

"The president should be fair to all employees and not just selected few. What is good for the goose is also good for the gander. Can you believe that Civilian Employee went home with just Ghc10,000 as his retirement benefit after working for 40years? That's how sad it is for people with degrees and masters degrees to be subjected to such treatment as if they are not human beings."