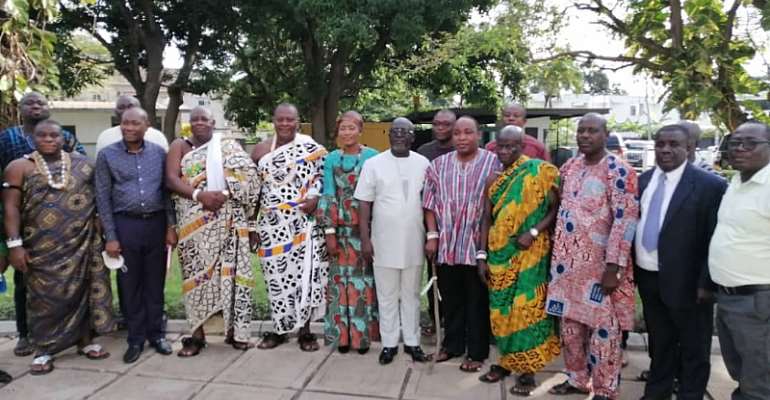 The Chief Executive Officer of the Minerals Commission, Mr Addae Antwi-Boasiako has hailed the decision of the Chiefs in Ada to work with Government to harness the salt deposits in the Ada enclave.

Mr Antwi-Boasiako said this when a delegation from Ada Traditional Council called on the Commission to affirm their assurance of working with Government on the new proposals to develop the salt industry in the area, following the end of 21-day mandatory publication of Electrochem Ghana Limited’s Mining lease applications.

Addressing the Chiefs, the CEO, noted that the Minerals Commission has identified salt as one of the strategic minerals that will facilitate the socio-economic development of the country and specifically, the development of allied industries such as the Caustic Soda and Chlor Alkaline Industries.

“Given the salt resources in the three (3) areas stretching from Ada through Keta to Adina, this will open up the area for socio-economic development that has been deprived the area for so long due to factionalism and mistrust among the people in ensuring sustainable exploitation of the resource”, Mr Antwi-Boasiako reiterated.

The CEO assured the delegation that, the Commission and other mining regulatory Agencies in facilitating the necessary licenses and permits for mining and processing, will ensure that all obligations required of the investors such as Environmental and Social Impact Assessments are carried out thoroughly to safeguard people of Ada and adjourning communities.

Speaking on behalf of the delegation, Nene Agudey Obichere III noted that, the visit to Minerals Commission was to assure management that the misunderstanding which ensued in some communities in the area after their visit to the Presidency has been resolved.

Therefore the mission of the delegation is to impress upon the Commission to fast-track the processing of the licensing applications by the new investors who have expressed interest and already engaged the Traditional Council to mine and develop the salt industry at Ada.

“Members of the Traditional Council have agreed to support this new proposed project for which applications have been made to the Commission for the grant of a lease so that Ada and communities around will hence benefit from its resource endowment”, Nene Agudey Obichere III said.