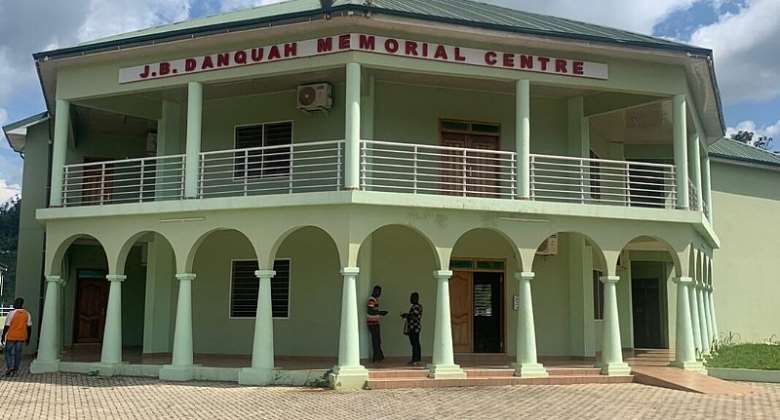 The Ofori Panin Fie has rubbished claims that the construction of J.B Danquah Memorial Centre was financed by the state with taxpayers money.

Popular talk show host Kwabena Bobie Ansah claimed on radio show that tax payers money has been used to build the edifice to serve as a library but has been decorated with images of the late Uncle of the President, Okyenhene and the President himself while denying children the use of the Library. The presenter also claimed that the hometown of the president is being developed ahead of other places in the country.

However, a statement issued Monday October 19,2020 by the Palace of the Okyenhene stated that “the attention of the Ofori Panin Fie has been drawn to a video in circulation in which an ill-informed broadcast journalist by name Kwabena Bobie Ansah of Accra FM falsely attributes the financing of the J. B. Danquah Memorial Centre to the sole efforts of the Government of Ghana “.

“the Ofori Panin Fie is concerned with the substance of the publication and refutes these claims as they are false. It finds them an irresponsible and abysmal attempt to misinform the populace and heighten tempers within the country as the 2020 general elections draw nearer.

The statement said “to clarify and respond to issues raised in the publication of concern, the Ofori Panin Fie informs the public that in 2006, the Former President, H.E. John Agyekum Kuffour, in the interest of national development, commenced the construction of the facility in Kyebi to serve the people of the constituency as well as neighbouring areas of the constituency.

“The project was abandoned by the Mills/ Mahama administration and was later completed in 2018 through the advocacy of the Akyem Abuakwa Traditional Council and sponsorship by Huawei Ghana, a Chinese telecommunications company”.

According to the Ofori Panin Fie ,” the facility was named the J. B. Danquah Memorial Centre in commemoration of his outstanding contributions to the birth and development of our nation. It houses an ultra-modern ICT Lab donated by the Yamoransa Foundation for the teaching and learning of ICT with special emphasis on STEM (Science, Technology, Engineering and Mathematics) subjects, a Maker Space also donated by the Yamoransa Foundation for the teaching of robotics engineering as well as the construction and development of virtual reality-based applications, games and applications of 3D printing, a GIFEC Zonal office which is a 30-seater ICT lab purposed for the teaching, learning and application of ICT.

“The facility also houses a library, an EC office and a radio station. The entire facility is managed under the auspices of the Ghana Library Authority, the EC and Okyenhene.As such, the Ofori Panin Fie and Nananom of Akyem Abuakwa would like to state emphatically that:The J.B. Danquah Centre was not financed by the Ghanaian tax payer’s money. It was, however, sponsored by Huawei Ghana and the Yamoransa Foundation”

The statement concluded that “the J. B. Danquah Centre is not a family property of the Ofori Panin Fie, it is the property of the Ghana Library Authority and is meant for public use by members within and without the community. We wish to admonish all journalists to remain decorous and professional in their reportage and desist from the publication of misleading information to ensure the continual dignity of the media space.The Ofori Panin Fie remains open to all who call upon her for any further clarifications to any issue as concerns the Kingdom and the State.”

Record-breaking African teams bounce back from 2018 disappoi...
5 minutes ago