Social networks at heart of investigation into teacher’s assassination 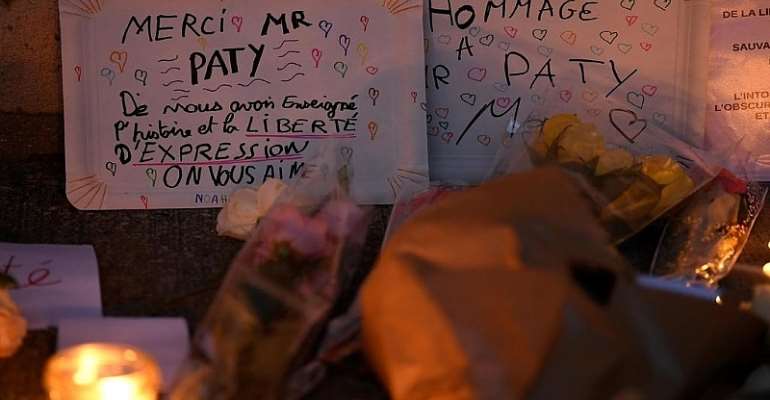 French investigators on Monday were piecing together the puzzle of how a lesson in a junior high school involving cartoons of the Prophet Mohammed provoked protests on social networks and led a man living 80 kilometres away to track down and murder the teacher Samuel Paty.

Police are trying to determine how the suspected assailant, an 18-year-old Chechen refugee, who lived 80 kilometres from the scene of the attack in Paris's north-western suburbs and had no known link to the community, was able to identify his victim.

According to newspaper Le Monde, Abduallakh Anzorov arrived at the school with several hundred euros that he offered to students in exchange for information about Samuel Paty, whom he beheaded at around 5pm on Friday, the last day of classes before a two-week school holiday.

A 15-year-old student was arrested on Sunday under suspicion of giving information in exchange for cash, though it was unclear whether the student was aware of Anzorov's intentions.

Police were also questioning 11 detainees, including Anzorov's parents, grandfather, one brother and several acquaintances, in hope of understanding whether the suspect travelled to the suburb of Conflans-Sainte-Honorine by car or train, as well as when and how he became radicalised.

In July, a government platform for monitoring online radicalisation had identified a Twitter account belonging to Anzorov that was opened in June, and featured extracts of the Qu'ran and comments on current affairs including France's proposed law against “separatism”.

Monitors did not however establish a link between the account and any plan to carry out an act of violence, until Anzorov used it to publish an image of his victim.

It was not clear at what point Anzorov learned of the online backlash to a session of a moral and civic education class on 5 or 6 October in which Paty reportedly showed cartoons of the Prophet Mohammed to students around 13 years of age.

The online campaign against Paty began on 7 October, Brahim C., the father of a 13-year-old girl in the class, posted a Facebook video alleging the teacher had asked Muslim students to identify themselves and leave the room if they did not want to see the images, including one of the prophet naked.

The man claimed his daughter opposed the lesson and was removed from the class. Investigators want determine whether the girl had even attended the class, with some reports saying she was listed as being absent due to illness on 5 and 6 October.

In a second video posted 8 October, Brahim C. told the same story using a harsher tone, calling the teacher a “thug” and calling for supporters to join him in taking his protest to the collège.

Later that day, he and Islamist activist Abdelhakin Sefrioui took their grievance to the school principle in a meeting that did not calm tensions, with the two men threatening a protest outside the school if Paty was not removed.

Brahim C. also lodged a legal complaint for showing pornographic images to minors. Investigators questioned Paty, who denied any intention to do harm and assured he had proposed to the students to turn away from the images if they did not want to see them.

Paty filed a complaint for defamation against the father.

French security services had by 12 October concluded that the situation in the school had calmed and that Paty was in no need of protection. They were apparently unaware of mounting emotion being expressed online.

That same day, a third video was published, in which Sefrioui filmed the man and his daughter in front of the school telling the same story, this time with the daughter assuring even non-Muslim students were offended by the lesson.

Brahim C. and Sefrioui are among the 11 people arrested as police try to determine exactly what was said online and whether Anzorov acted alone or at the behest of others.

On the political front, Interior Minister Gérald Darmanin accused the father and Sefrioui of having “apparently launched a fatwa” against Paty, and government officials pledged to crack down on online calls for violence.

Police were also carrying out raids on homes of individuals suspected of relaying messages against Paty online, and Darmanin pledged to seek bans on a number of groups that security services said were linked with radicalisation.

“Those who participated in a public lynching of this teacher via videos on social networks are in a certain manner responsible for what happened,” government spokesperson Gabriel Attal said.

Representatives of the French offices of Facebook, Twitter, Snapchat and other social networks were summoned to the interior ministry on Tuesday.