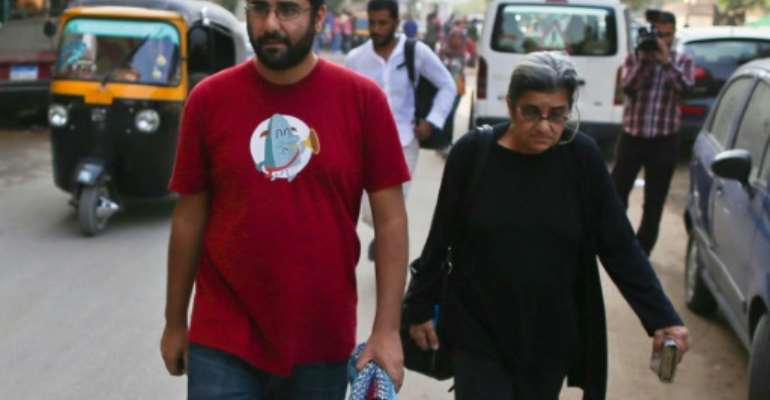 Egyptian activist Alaa Abdel Fattah (left), who along with his sister is back in detention, walks with his mother Leila after a 2014 court hearing in Cairo. By Mohamed el-Shahed (AFP/File)

US Democratic lawmakers on Monday urged Egyptian Abdel Fattal al-Sisi to free political prisoners, warning that they risk death in custody due to the Covid-19 pandemic.

The warning comes two weeks before US elections in which President Donald Trump, who has formed a close alliance with Sisi, is trailing in polls to Democrat Joe Biden.

In a letter to Sisi, whose country is one of the largest recipients of US aid, more than 50 Democratic lawmakers told Sisi that respect for human rights was "essential to the US-Egyptian partnership."

"The wrongful imprisonment of prisoners of conscience and other gross violations of human rights fundamentally undermine that partnership and those relations," said the letter led by Representative Ro Khanna, a rising leader among progressive Democrats.

The lawmakers raised cases including Sanaa Seif, a prominent activist taken away in an unmarked minivan in June outside the public prosecutor's office.

She was hit by charges that included "misuse of social media," according to her lawyer.

She is the sister of Alaa Abdel Fattah, a prominent figure in the 2011 Arab Spring uprising who was imprisoned in September 2019 after rare, small-scale protests.

At least two prisoners have died in custody this year including Mustafa Kassem, a US citizen who was rounded up in a sweeping 2013 crackdown and had gone on a hunger strike.

"Even in the middle of a global pandemic, President Sisi continues to lock up prisoners in notoriously overcrowded, dangerous prisons," Khanna said in a statement.

"President Sisi must release human rights activists, lawyers and other prisoners of conscience before they face a Covid-19 death sentence behind bars," he said.

Celine Lebrun, a French national whose activist husband Ramy Shaath remains in detention, where he is battling various ailments, said the letter was especially significant in mobilizing members of Congress days ahead of the US election.

The letter "also sends a powerful message to the Egyptian government that a Democratic administration and Congress will not be silent about the issue of human rights and political prisoners in Egypt," she said.