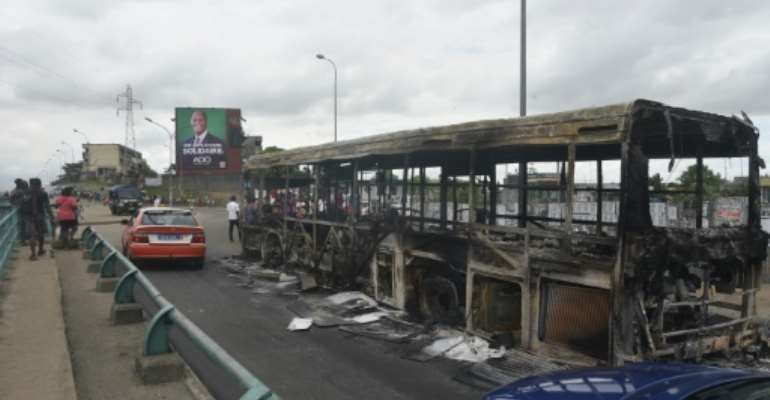 Students had responded to a call for protests from the opposition-aligned Fesci labour union. By SIA KAMBOU (AFP)

Students, who had responded to a call for protests from the opposition-aligned Fesci labour union, set fire to at least one bus and two cars in the Rivera 2 district of the country's economic capital, an AFP journalist said.

Security forces clashed with students who had barricaded several streets in the Cocody neighbourhood where the Felix Houphouet-Boigny University is located.

Fesci, a powerful union close to former President Laurent Gbagbo, said the demonstrations were not political and were only to protest against financial contributions demanded from students.

Tensions are running high before the October 31 election when President Alassane Ouattara is seeking a third term, with the opposition calling for a campaign of civil disobedience.

Critics say Ouattara's bid breaks with constitutional limits, though he says a 2016 reform allows him to run again by resetting the limit on the number of terms.

Dozens of would-be candidates have also been barred from running in the ballot, including Gbagbo and ex-rebel chief Guillaume Soro, both key figures in Ivory Coast's long-running political rivalries.

Many observers fear tensions over the election may push the West African country into a crisis like the one in 2010-2011 when 3,000 people died and Ivory Coast was plunged into chaos.