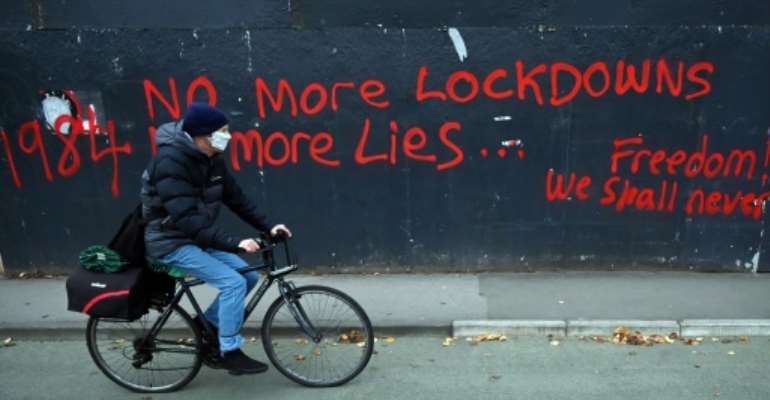 People in some countries such as Britain are chafing against new virus restrictions. By Paul ELLIS (AFP)

A raft of European nations including Italy and Belgium took desperate new measures on Monday to try to combat a second wave of coronavirus infections as the worldwide caseload topped 40 million.

The latest global milestone came just hours after the number of people who have died from Covid-19 passed 250,000 in Europe, according to an AFP tally, as the pandemic rampages across much of the continent.

Many governments are seeking to avoid the full-on lockdowns imposed in the first wave as they battle to keep their economies going but in some countries, people are chafing against the new restrictions on daily life.

In Belgium, where hospitalisations rose 100 percent in just the last week, bars and restaurants were closed on Monday for a month and a curfew will be reinforced overnight.

"Managers, chefs, dish-washers, everyone is suffering," Angelo Bussi said as he put the key in the lock of his Brussels restaurant late Sunday.

Several European countries have been shuttering bars and restaurants in a bid to fight a rampaging second coronavirus wave. By Abdulmonam EASSA (AFP)

"We don't feel like anyone cares. It breaks my heart," he told AFP before shrugging and walking off into the night. "Ah, well there we are, see you in a month."

Belgium's second major lockdown comes after Prime Minister Alexander de Croo warned the situation was "much worse" than in March when there was an almost complete confinement.

Italy, the initial epicentre of Europe's outbreak, also announced fresh curbs including earlier closures for bars and restaurants and a push to increase working from home.

In Poland, where around half the country is now designated as a coronavirus "red zone", the government said the national stadium would double as a field hospital to help ease the strain on overwhelmed health care facilities.

Switzerland meanwhile made mask-wearing compulsory in indoor public spaces and put limits on public gatherings after infections doubled over the last week.

Residents of Melbourne dashed back to reopened salons and golf courses. By William WEST (AFP)

"The second wave is here, earlier and stronger than we expected, but we are prepared," Swiss Health Minister Alain Berset said.

France imposed its own overnight curfew from the weekend in nine cities including Paris, affecting 20 million people, with a record 32,400 new infections reported on Saturday.

While European nations imposed new restrictions, a lockdown as eased in Austalia's second-biggest city of Melbourne on Monday, as residents flocked to reopened hair salons and golf courses that had been closed for more than 100 days.

The number of daily cases rose to 700 in August in the state of Victoria of which Melbourne is the capital, but following months of a strict lockdown it has fallen as low as one, with four recorded on Monday.

The countries with the highest coronavirus death tolls -- and their respective death rates. By John SAEKI (AFP)

"From yesterday, there are so many messages for me: 'I want a haircut'. They want to change their style," he told AFP.

While Melbourne's five million inhabitants were allowed to leave their homes for more than two hours a day for the first time since July, restaurants and most other retail businesses will remain shut until at least November.

'We have to try to live normally'

Israel has also lifted restrictions that banned people from travelling more than a kilometre from home as well as closing kindergartens, beaches and national parks.

Israeli mother Talia Zinkin said she was initially unsure whether to send her son back to daycare.

"But I felt he would enjoy being with other children," she told AFP. "We have to try to live normally."

The Grand Mosque in Mecca is the site of the annual hajj pilgrimage but only 10,000 people were allowed to take part this year. By STR (AFP)

Saudi Arabia eased more of its own virus restrictions when it allowed worshippers to re-enter Islam's holiest site for prayers on Sunday for the first time since March.

The Grand Mosque in Mecca is the site of the annual hajj pilgrimage that draws Muslims from around the world but only 10,000 people were allowed to take part this year, a far cry from the 2.5 million in 2019.

Numerous political figures have contracted the virus in recent days, including veteran chief Palestinian negotiator Saeb Erekat, who is in a "critical" condition and in a medically induced coma, the Jerusalem hospital treating him said.

A vaccine remains the great hope to end the cycle of imposing and lifting lockdowns across the world, and the United Nations said Monday it would stockpile a billion syringes worldwide by the end of 2021 for that purpose.

"Vaccinating the world against Covid-19 will be one of the largest mass undertakings in human history, and we will need to move as quickly as the vaccines can be produced," UNICEF executive director Henrietta Fore said.