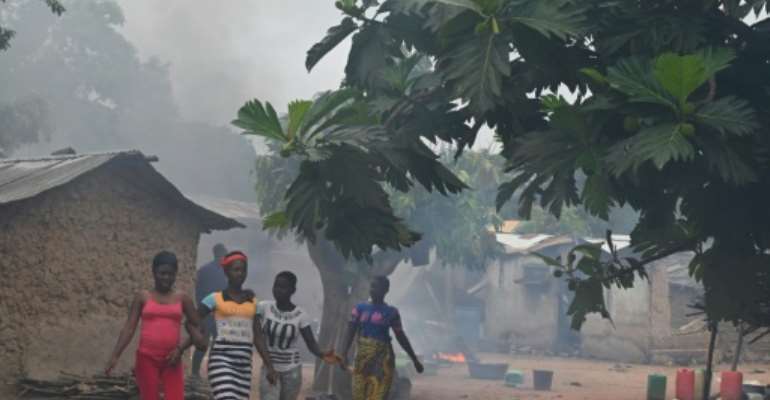 The clashes broke out Friday in and around Bongouanou north of the main city Abidjan. By Issouf SANOGO (AFP)

Ethnic clashes left at least two dead in an Ivory Coast opposition stronghold two weeks ahead of presidential polls, witnesses said Sunday, fuelling fears of a conflict on a scale of the one that engulfed the West African state a decade ago.

The clashes broke out Friday in and around the city of Bongouanou, a fiefdom of opposition candidate Pascal Affi N'Guessan 200 kilometres (120 miles) north of the economic hub Abidjan, the witnesses said.

A trader from the local Agni ethnic group considered pro-opposition was shot and hacked to death, a family member told AFP.

At least one ethnic Dioula -- a northern Muslim group who generally back President Alassane Ouattara -- was also killed in the area, according to several witnesses and a hospital source.

An AFP journalist reported that in Bongouanou itself many shops and restaurants were looted and set on fire, and several cars were torched.

Many shops and restaurants on Bongouanou were looted and set on fire, and several cars were torched. By Issouf SANOGO (AFP)

Affi N'Guessan, a former prime minister, told AFP on Saturday that his house in Bongouanou was burned down.

On Sunday, groups of Agni youths criss-crossed the town, brandishing machetes, knives, iron bars and other weapons including slingshots, many drunk on palm wine.

Hundreds of residents could be seen fleeing the area on foot, wearing backpacks or carrying sacks of belongings on their heads.

About 15 people were killed in inter-communal violence in August and September in several cities across the former French colony after Ouattara announced his intention to run for a third term.

Many observers fear a crisis may be sparked comparable to the post-election violence in 2010-11 when 3,000 people died and Ivory Coast was plunged into chaos.

Also Sunday, a mission of the Economic Community of West African States (ECOWAS) arrived in Abidjan, the second by the 15-member regional grouping to the troubled country, the world's top cocoa producer.

"No crisis can be resolved without dialogue," said mission leader Shirley Botchway of Ghana after an hour-long meeting with Affi N'Guessan and another opposition candidate, Henri Konan Bedie.

Listing the opposition's demands -- notably for Ouattara to scrap his contentious bid for a third term, and for sidelined candidacies to be authorised -- Affi N'Guessan vowed "to fight until these demands are met."

Dozens of would-be candidates were barred from running in the election, including former president Laurent Gbagbo and ex-rebel chief Guillaume Soro, both of whom played key roles in the 2010-11 crisis.

In addition to Ouattara and Affi N'Guessan, former president Henri Konan Bedie and former parliamentarian Kouadio Konan Bertin are in the running.

Ouattara, who officially launched his campaign on Friday, had announced in March that he would not seek a third term.

The ECOWAS mission was to meet Ouattara and Prime Minister Ahmed Bakayoko on Monday.

Friday's clashes erupted when young backers of Affi N'Guessan set up roadblocks using tree trunks or oil barrels on two major arteries of Bongouanou in response to an opposition call not to take part in electoral events and campaigning in a step towards a potential boycott.

Affi N'Guessan alleged on Saturday that the assailants were "transported from Abidjan" to Bongouanou to target him and other opposition figures.

Hundreds of residents could be seen fleeing the area on foot, wearing backpacks or carrying sacks of belongings on their heads. By Issouf SANOGO (AFP)

The ethnic Agnis and Dioulas blamed each other for the violence, which occurred despite a sizeable deployment of police and paramilitary police.

"The Dioulas are the problem," one Agni youth shouted, a machete in hand, at one of the roadblocks. Wearing a green camouflage bandana, he had daubed his face with axel grease.

But in a mainly Muslim district of Bongouanou, the blame was thought to lie with the Agnis. "They were blocking the roads and we depend on trade and transport," said Cisse Sekou, an elder dubbed the "Commander", as hundreds of youths looked on. "And then they looted and burned our shops, they torched our vehicles."

The Dioulas' actions -- burning restaurants, kiosks and shops belonging to Agnis -- were in retaliation, he said.