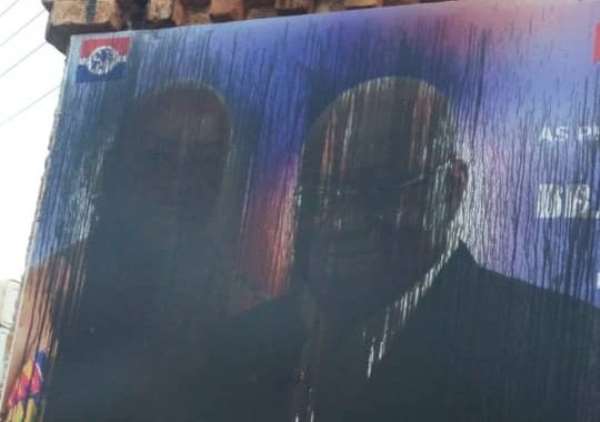 Tension is brewing at Dunkwa-On-Offin in the Upper Denkyira East constituency of the Central Region as the ruling New Patriotic Party (NPP) is accusing the opposition National Democratic Congress (NDC) of organizing people to deface campaign posters and billboards belonging to the NPP’s parliamentary candidate, Festus Awuah.

The unknown persons defaced the posters and banners of the NPP candidate with dirty oil in the early hours of Sunday, October 18.

The campaign posters were placed at vantage points in the constituency.

This situation has sparked some tension in the town with some NPP supporters threatening to disrupt the visit of former President John Mahama to the constituency, a situation the police are trying to bring under control.

Addressing the disgruntled supporters of the NPP, the party’s parliamentary candidate for Upper Denkyira East, Festus Awuah, alleged that the billboards and posters are being defaced by their political opponent, the National Democratic Congress.

“This act could only come from someone who has already lost a political battle even before the general elections,” the NPP parliamentary candidate said.

“Today is a good day for the NPP because so many good things are happening within the constituency. But we woke up only to see this dastardly act. Our opponent has decided to employ this strategy after coming to terms with the realities that they cannot wrestle and win the seat,” Festus Awuah said.

According to him, the Upper Denkyira East constituency seat is a seat for the NPP and will remain so even after the 2020 elections.

He further called for calm adding that they are in talks with the police to get the perpetrators to book.

The NDC in reacting to the attempt by the NPP to disrupt the visit of the former president John Mahama also trooped to the NPP’s office to protest against the decision.

He further called for peace.

There is a heavy security presence at the NPP’s party office and the venue where the NDC is hosting the former President John Mahama to ensure that peace prevails.