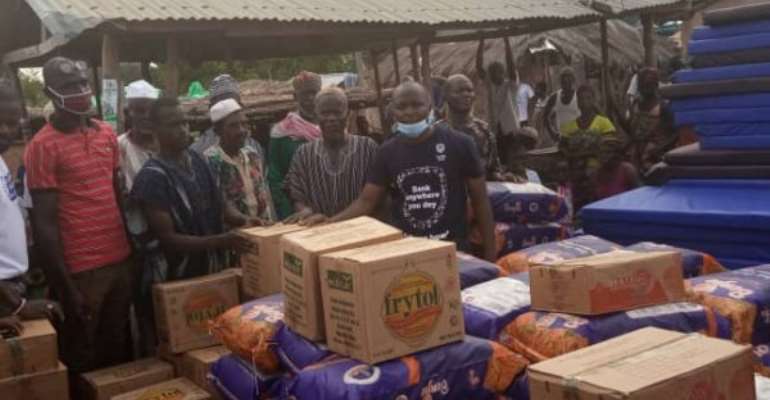 The Chief of Savelugu, Yoo Naa, Abdulai Andani, is unhappy about the inability of governments to find lasting solutions to the perennial flooding in communities in northern Ghana resulting in needless loss of lives, property and displacement of families.

He said deaths resulting from the floods could be avoided, while destruction of farms annually by the floods, displacement of families and toll of hardships that beset communities living near the Volta basins could also be minimised if concrete measures were taken in the past to arrest the situation.

He proposed stakeholder collaboration to find lasting solutions to the annual canker that put fear and hopelessness in the people each year the rains come.

The Yoo Naa expressed the concerns when officials of Stanbic Bank Ghana visited his palace to present relief items for distribution to his subjects who were victims of the recent floods resulting from torrential rains and spillage of the Bagre Dam in neighbouring Burkina Faso.

The Bank presented quantities of assorted consumable and non-consumable relief items to support flood victims, who were hard hit by the disaster that affected hundreds of people within Savelugu and its environs.

The Yoo Naa expressed gratitude to the Bank for the gesture and appealed to individual philanthropists, corporate institutions and citizens of Dagbon to help provide some comfort to the victims by emulating the gesture exhibited by Stanbic Bank.

He indicated that management of the Bank appreciate the hardships that the community members were going through, adding that as human centered Bank, it was critical that it swiftly responded to the call in order to reduce the predicament confronting the communities in the trying moments.

The Assembly Member for the Nawuni Electoral Area, Alhassan Ussif, who received some of the items on behalf of the Nawuni and Afayili communities, explained that there were about 950 houses in these communities, and said out of the number, about 770 were severely hit by the floods, adding that the victims suffered losses including; submerged farms and homes, and drowned animals.

He appealed to the Assembly to supportthe victims. "We need food and water now. These are our immediate requests, and then we would later see how to reconstruct our homes", he added.

Six die in accident at Hemang after car crashed into wrongly...
29 minutes ago