By Macharia Munene - The Conversation 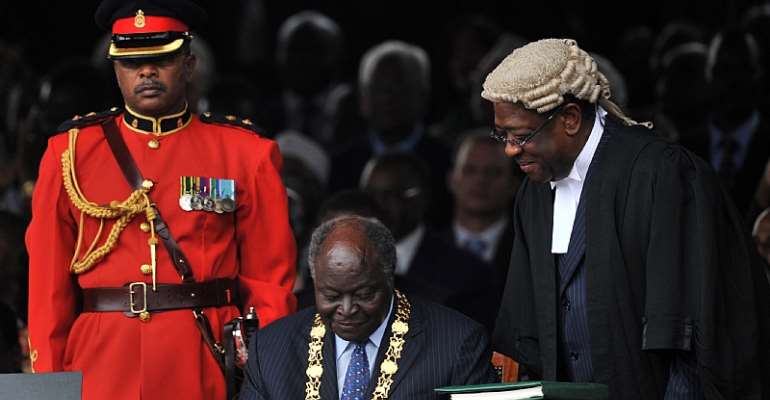 Kenya is in the throes of another agonised constitutional debate . Proponents of the new push for amendments argue that the time is right to cure deficiencies in the 2010 constitution . Yet that document is only a little over 10 years old, and followed a referendum that ushered in the most comprehensive constitutional reforms since independence in 1963.

A look back in history helps us understand Kenya's perennial quest for constitutional change.

In the colonial era, constitutional demands were led by white settlers who ruled over the African population. Africans had no rights to land or civil amenities. In 1907, Britain conceded to white settler demands and created the Legislative Council . It began as a nominated, exclusively European institution with no provision for natives. Eventually, it became an elected body and a white missionary was nominated as the first official member to represent the interests of the African community. African elites challenged the privilege of white missionaries speaking for Africans.

From then on in constitutional power play became a domestic affair as local power brokers competed against one another. This resulted in power-hungry politicians faulting existing structures and demanding changes to the constitution. This was the case at the outset of colonialism and is still the case in 21st Century post-colonial Kenya.

The current push for constitutional change is reminiscent of these earlier trends – it is all about competition for power among the country's elite.

There have been three major phases to constitutional reform in post-colonial Kenya.

The first followed the death of Jomo Kenyatta , the country's first president. The second revolved around the consolidation of power, and the survival, of the country's second president Daniel arap Moi . The latest is to push to amend the 2010 constitution.

When Kenyatta began ailing, rival politicians engaged in constant mischief as they schemed to identify a suitable successor. Constitutional Affairs Minister Tom Mboya , who belonged to the ruling Kenya African National Union, ensured that the 1963 constitution sidelined his party-mate, Kenya's first Vice-President Jaramogi Oginga Odinga in the succession line up.

Ruling party honchos then turned to infighting as the then Vice-President Daniel Moi, formerly the chairman of the opposition's Kenya African Democratic Union, looked on. Moi began to see how he could use the wrangling to ascend to the presidency. His first opportunity came in 1968 when successful constitutional amendments ruled Mboya out of the succession picture.

The law stipulated that in the event the president died, the vice-president would take office for 90 days and then call an election. In addition, the president was granted powers of detention without trial, meaning that he could detain his opponents as he saw fit.

Moi's second opportunity came in the 1970s when he himself was the target of proposed constitutional amendments. His proponents wanted to return to the previous formula. Moi outwitted them by forming alliances with influential players across the country.

When he ascended to the presidency in August 1978, part of his control strategy was to constantly remind the public about how he foiled the amendments. That narrative ignored the successful constitutional change in 1968, of which he was the main beneficiary.

Moi held the presidency for 24 years. Crafty in exploiting perceived weaknesses, his main constitutional concern was to consolidate his grip on power.

To secure his position, he engineered a constitutional amendment in June 1982 to make Kenya a one-party state. KANU was the “party”. This was the “Section 2A” amendment to the constitution the purpose of which was to stop the former vice-president Oginga Odinga from starting another political party.

A number of additional amendments were added, also designed to give Moi more power. These included the removal of tenure for constitutional office holders and an egregious amendment that replaced secret ballot at elections with voters lining up behind their candidate or agent at the 1988 elections.

These amendments backfired on the president, produced new national heroes, and eventually forced the repeal of Section 2A in December 1991 to pave way for the 1992 multiparty elections.

Following the repeal, the debate centred around Moi's survival. In 1992, when he was still in control of Parliament, he took three far reaching steps. First, he introduced an amendment that required winning candidates to obtain 25% of votes cast in five of Kenya's eight provinces. This made it difficult for any opposing candidate to win outright.

Second, he imposed a two-term limit for future presidents, just in case he lost. And third, he appointed retired judge and ally Zacchaeus Chesoni chairman of the electoral commission . Chesoni declared Moi the winner in the contested 1992 elections , despite the president garnering just 36% of the vote, and swore him in immediately probably to avoid court challenges.

After he won the 1992 election, Moi became preoccupied with repealing the two-term limit he had previously imposed. The period between 1993 and 1997 became charged with the constitution debate. This led to the formation of the Inter-Parliamentary Party Group , which committed to a review of the constitution after the 1997 election.

Moi and Raila recruited lawyer Yash Pal Ghai who unified the review commission and Ufungamano initiatives, and together the two groups prepared a draft constitution. That draft became the basis of constitutional debate between 2003 and 2005. The debate culminated in the 2005 constitutional referendum . The draft was voted against, setting the stage for the chaotic 2007 elections .

The third post-colonial phase of constitution-making came about as a direct result of the 2007 election chaos .

What finally emerged was a grand coalition government between Raila Odinga and the incumbent Mwai Kibaki . The two finally agreed to a co-presidency with Kibaki as the president and Odinga in the new position of prime minister.

The co-presidency shepherded in the 2010 constitution because they were required to pass the new law as part of the national accord agreement that set up the grand coalition government.

But the document had many flaws which meant that its promulgation created new constitutional conflicts.

Ten years on and gyrations around Kenya's constitution continue. The current drive for change is happening under the guise of the Building Bridges Initiative . This suggests that, once again, constitutional reform is being driven by political power agendas.

The changes that are likely to be effected will, therefore, not be the last because there always will be groups or individuals who will question the existing power structure. They are interested in grabbing power, not the effective functioning of constitutional structures in a state.

Macharia Munene does not work for, consult, own shares in or receive funding from any company or organisation that would benefit from this article, and has disclosed no relevant affiliations beyond their academic appointment.