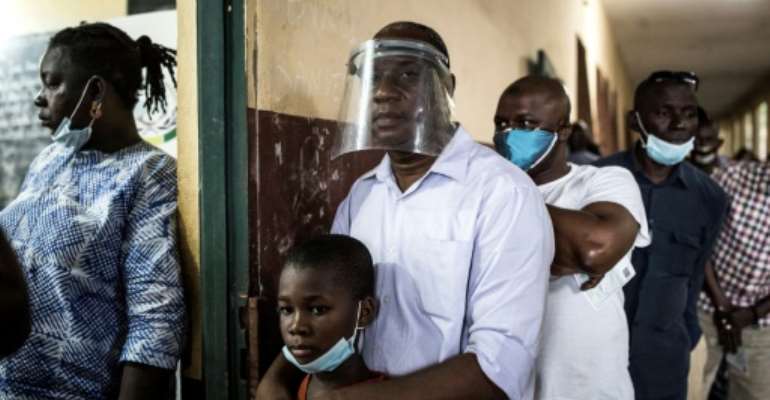 Voting began in Guinea slightly ahead of schedule. By JOHN WESSELS (AFP)

The poll -- the first in a string across West Africa -- follows months of political unrest in the former French colony, where dozens of people have been killed during security crackdowns on mass protests against Conde's move.

Campaigning for the first round of the vote was marked by insults traded between Conde and his leading rival Cellou Dalein Diallo.

People lined up at polling stations and voting began about half an hour ahead of the scheduled 0800 GMT opening.

Conde pushed through a new constitution in March, arguing that it would modernise the country. But the move controversially allowed him to bypass a two-term limit for presidential terms.

After decades as an opposition activist, Conde became Guinea's first democratically-elected president in 2010 and won again in 2015.

Rights groups have become increasingly critical of the president, however, accusing him of veering towards authoritarianism.

Guinea's President Alpha Conde pushed through a new consitution allowing him to bypass a two-term limit for heads of state. By JOHN WESSELS (AFP/File)

Sporadic clashes between rival supporters have broken out across Guinea in recent days, sparking fears of further violence on polling day.

Kabinet Fofana, a Guinean political scientist, cast the election as a battle between Conde promoting his record in office, and his opponent arguing for change after a decade of his rule.

"This election will play out for Alpha Conde on (his ability) to promote his public policies," Fofana said.

But Conde's advanced age will weigh on voters' minds, according to Fofana.

Diallo raised the issue several times during the campaign, even encouraging Conde to "retire with dignity".

The sharply-dressed president has brushed off the gibes, however, and conducted a vigorous helicopter tour of the country.

Known as being quick to anger, Conde spent decades as an opposition activist, and was even sentenced to death in absentia by a former autocrat, before finally taking power in 2010.

He beat Diallo to the presidency then, and pulled off the feat again when he was re-elected in 2015.

Among other things, Conde promised to boost the economy of the nation of some 13 million people, to tackle corruption and increase Guinea's lamentable electricity access.

He has stuck to a similar script during this year's campaign, pledging to make Guinea "Africa's second (economic) power after Nigeria".

'We want him for our future'

But Guineans interviewed by AFP expressed deep frustration about the state of the country, regardless of their political stripes.

Guinea is a former French colony. By Gillian HANDYSIDE (AFP)

The country is rich in minerals such as bauxite, iron and gold, and has abundant fresh-water resources. However it remains one of the poorest countries in the world.

"In 10 years, Alpha Conde has done nothing," said Aminata Barry, a 36-year-old opposition supporter, adding that he had made "only promises".

Conde nonetheless retains a bedrock of supporters who hail his efforts at economic revival. He drew huge crowds on the campaign trail, where he dismissed his many critics.

"Despite his age, we want him for the future of our youth," said lawyer Sekou Diakate, 47, who was among thousands attending a Conde rally Friday.

Results are expected in a few days. By JOHN WESSELS (AFP)

Diallo -- a self-described technocrat -- has pointed to Conde's "catastrophic record" and taken to pointing at his watch while campaigning, symbolising that the octogenarian's time has run out.

"He no longer has the physical and intellectual capacity to carry out this demanding function," he recently told French broadcasters.

The vote marks the start of a busy electoral cycle across West Africa, with votes also due in Ivory Coast, Burkina Faso, Ghana and Niger.

Some of the major issues in these elections bear a striking semblance to the political debate in Guinea.

In Ivory Coast, for example, incumbent President Alassane Ouattara is running for a third term after revising the country's constitution. The October 31 vote will also take place in a highly tense atmosphere.

Activists are concerned that a win for Conde would bode ill for democratic norms in the region.

Some 5.4 million registered voters are due to cast their ballots, and initial results are expected to be announced several days afterwards.

A second round is scheduled for November 24.