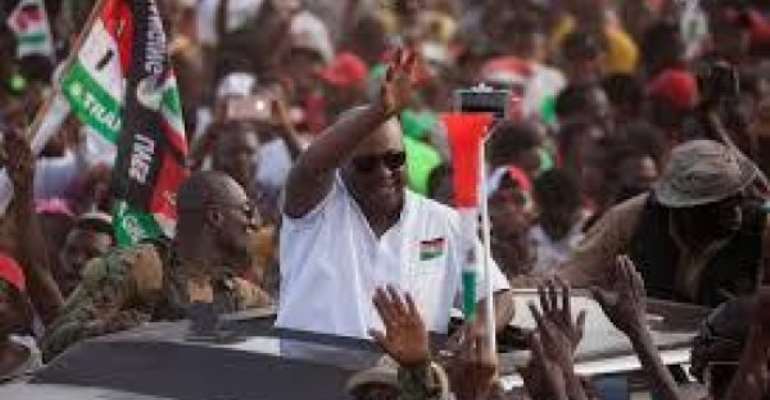 The next National Democratic Congress (NDC) government will upgrade the Asuansi Technical Institute (ASTECH) into a modern satellite campus of the Cape Coast Technical University (CCTU).

Former President John Dramani Mahama and the flagbearer of the National Democratic Congress (NDC) made the promise at a mammoth durbar of Chiefs and people of Abakrampa in the Abura-Asebu-Kwamankese (AAK) District of the Central Region.

The intention is geared towards giving true meaning to technical education as the panacea for rapid socio-economic development.

Giving credence to the Party's achievements, he said in 2013, the NDC government under his reign thought it prudent to convert polytechnics into technical universities with needed legislation to support the polytechnic-university migration.

This was given presidential assent by Mr Mahama in 2016 and the various polytechnics that met the necessary criteria were converted into technical universities.

Mr Mahama said he was optimistic of a resounding victory in the December 2020 polls to effectively rebrand and reposition TVET through strategic resourcing and capacity building to solve the huge unemployment situation in the country.

“We intend to re-align all TVET institutions and place them under the Council for Technical and Vocational Education and Training (COTVET) and build additional and operationalize, new public universities that will have campuses in each of the newly created six reasons."

The new universities will focus on technical, vocational, and engineering programmes tailored to address two main challenges – fix the imbalance and the gap that existed between the top and bottom level manpower requirements.

It will also build a level of technical knowledge needed for many sectors of the Ghanaian economy to address the level of unemployment by providing young people with the requisite skills that will enable them to chart a path of self-employment.

Mr Mahama promised free TVET at all levels, which he believed would aid in the training of more skilled human resources for national development and noted that "NDC will not pay lip service to TVET because the training will move this country to the next level."

He said his vision was to implement inclusive and sustainable-development that cuts across all sectors and reiterated his determination to complete all abandoned projects.

In that light, he said his policies such as the 'Big Push”, the $10 billion accelerated development plan, would fix many of the infrastructure deficits in many sectors of the country to stimulate growth, jobs creation, and development on a massive scale.

His policies, he said, would develop a workable, sustainable and progressive economy that would benefit all and not just a few individuals by protecting and promoting indigenous businesses and not kill them.

Mr Felix Kwakye Ofosu, the NDC Parliamentary Candidate for AAK said development was the backbone of every progressive nation and urged the people to vote for him and Mr Mahama to implement what he described as “the massive development programme”.

For his part, Nana Okum Gyata VI, Ankobeahen of Abakrampa thanked Mr Mahama for ensuring that every corner of the country benefitted from some form of development during his tenure as President.

However, he appealed for more infrastructure and jobs to better the lives of the people.