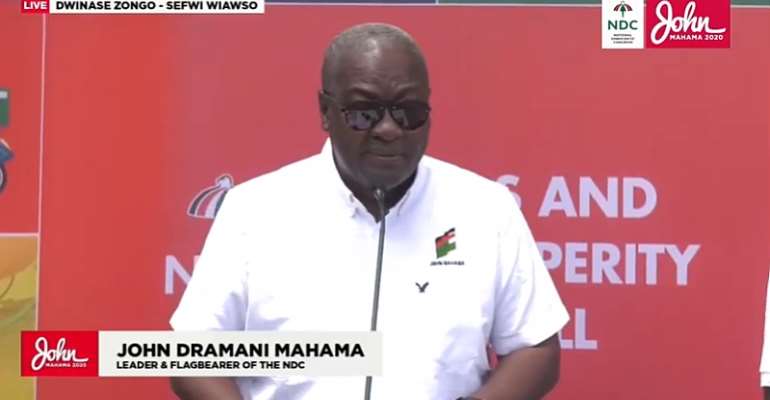 Former President, John Dramani Mahama has promised to fix the flooding situation in Accra as part of his US$10 billion Big Push infrastructure agenda.

He says the annual occurrence of homes and other parts of the city getting inundated with water is largely due to engineering challenges.

Heavy rains in the capital, more often than not, result in flooding across Accra, with many attributing the perennial occurrence to the siting of structures on waterways, and blocking of drainage systems, a situation that forces rushing floodwaters onto the streets and into homes.

Deaths and loss of properties from flooding in Accra seem to have become a regular phenomenon and this situation has persisted for several years.

Successive governments have spent several millions of cedis in an attempt to address the problem but there has been no significant improvement in the situation.

In an interview with Woezor TV in Cape Coast in the Central Region, the flagbearer of the National Democratic Congress (NDC) assured of tackling the menace should he emerge victorious in the upcoming general elections.

“We need to get an engineering solution to the flooding in the capital. Accra’s problem is an engineering problem and also not sticking to the planning rules. We have local government authorities who are not able to manage the development of our communities. You also have traditional rulers who are ready to sell any land even if it’s in river beds. People buy land during the dry season but it gets flooded during the rainy season. So it is an engineering problem which will take a huge amount of money to solve. So we are looking at the Big Push and see how we can channel some of that money into solving the flood issue in Accra in particular.”

John Mahama has announced a $10 billion accelerated infrastructural plan, dubbed the Big Push, which he says will drive jobs and entrepreneurial agenda. But policy think tank, IMANI Africa wants the NDC to clarify aspects of its manifesto by providing a detailed execution plan for such policies.