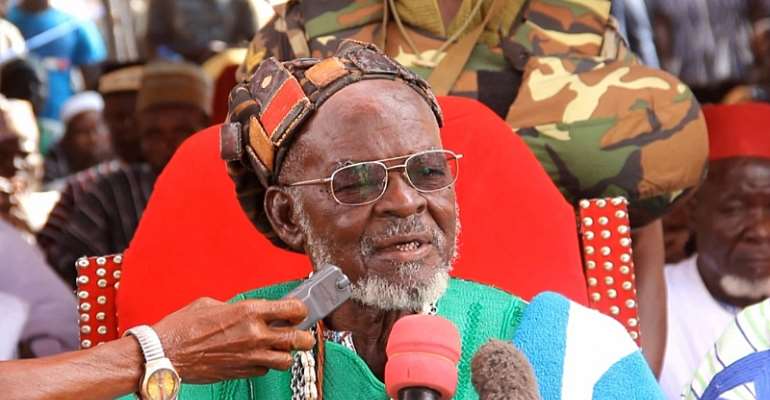 He said chiefs who are declaring their political support for parties undermine the chieftaincy institution and require that they return their regalia locally called 'Kpanjag' back to him if they wish to go into active politics.

The Zug-raan gave the warning when his Divisional Chief for Binaba, Moses Appiah Abaare who was speaking on his behalf openly declared his political support for President Nana Akufo-Addo during his tour of the Region.

Naba Appiah Abaare was reported to have stated that, "All the people in this area, the Kusaug land, have cattle to dowry our wives, have cattle for our income and have cattle for any other thing. We used to sell all our cattle to pay school fees. You have come at the right time to save mother Ghana.

"Mr. President, the Zugrana has asked me to make a solemn appeal to you that by all means, you will come back again the second time and when you come back, you should not forget about Bawku West. We are so large that we need another district.

"Four more for Nana to do more", he assures.

This, according to Bawku Naba, the 1992 constitution frowns on.

He added that the constitution clearly stipulates that chiefs can abdicate their throne when they show interest in partisan politics. " The same constitution in article 276 (1), says you can abdicate and go and do your politics and so if any chief under my paramountcy is interested in joining politics you can return the Kpanjag and go ahead."

Naba Abugrago Azoka II said this at an emergency meeting with his 25 divisional chiefs in Kusaug Traditional area at the head office in Bawku, Upper East Region on 17th October 2020.

The Vice President of the Kusaug Traditional Council Naba Tambiisu Kuweke, Ibrahim Aguuri in his submission also called on his colleague chiefs to embrace any political party presidential candidate who may called on them at their palaces without taking stances.

"You may not know the one who will win and so when you openly campaign for one person or party and the person loses you may not get what you want under his tenure as president and that will largely affect the entire people under you. So be extra careful not to create problems with your pronouncements before political candidates," he warns.