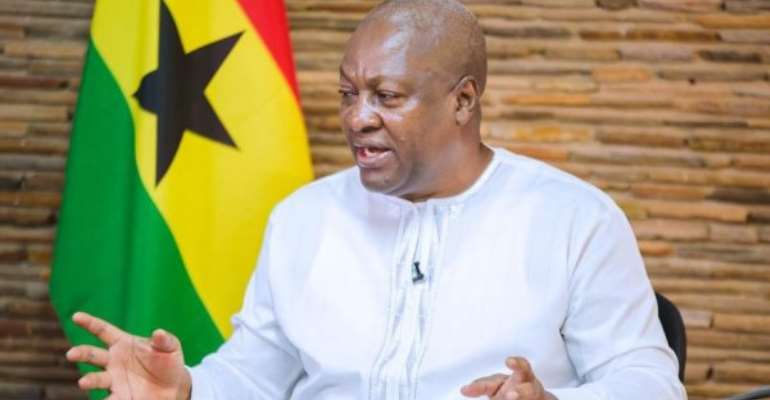 Former President John Dramani Mahama has assured fisherfolks of the Party's resolve to set up a credit scheme to support their livelihoods.

The scheme he explained would offer flexible micro-loans, advisory services and effectively empower players in the fisheries value-chain to ease the financial burden on them as they grew their businesses.

The Presidential Candidate announced this at separate durbars for fishers at Elmina and Cape Coast as part of his four-day tour to the Central Region.

He announced plans to reconstruct the Elmina fishing market and rehabilitate an existing cold store to augment the work of fishers in the area regarded as the heart-beat of fishing in the Central Region.

He said the NDC had prioritised the completion of an abandoned landing beach projects it started when elected in the 2020 election and also fix the challenges of premix fuel shortages by supplying it directly to fishermen.

According to him, the “middlemen” in the supply chain of premix fuel, was frustrating fishermen and he will remove them to ensure direct supply to fishers at the various landing beaches.

He said a new NDC government will facilitate the acquisition and supply of fishing inputs such as outboard motors and fishing nets on credit to fishers.

On job creation, Professor Joshua Alabi, the 2020 Campaign manager for the Party revealed that the Party would absorb apprenticeship fees paid by carpenters, welders, plumbers, electricians, and hairdressers, among others,

He referred to the skills training programmes, free TVET, the pledge to withdraw the law banning the importation of accident vehicles as well as scrap import duties on commercial vehicles and agricultural equipment.

He said the party would introduce a one million jobs plan, a $10bn Big Push investment, and establish Agriculture Mechanisation Centres to boost production, food processing, marketing, among others, as big initiatives to improve the lives of all.

Scores of fishermen took turns to address the gathering stating numerous challenges including lack of financial and logistical support for them and the fishing industry and pleaded with the government to stop the closed fishing season and ease the challenges of premix fuel distribution.