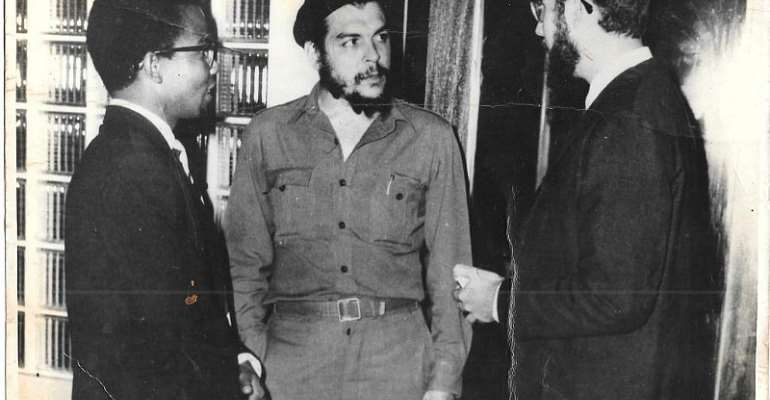 It was on a cold October day in London that I heard that my dear friend, Fifi Hesse, had left this world.

No – there must be a mistake, I thought.

Indeed, I retained a not inconsiderable hope that the news might be false. For, believe it or not, a false report of his death had been published once before! I had opened the pages of West Africa Magazine in London in 1986 and had read an article by an official of the Oxford University Rhodes Scholars Alumni Association, in which the writer had penned the word “Deceased” against the name of L.W. Hesse!

I was immensely agitated. How could Fifi have died without my hearing of it in London, which has now – basically – become a suburb of Accra, as far as “local news from Ghana” is concerned?

I was delighted, when I checked from Accra, to hear that Fifi was alive and well, and had been enjoying, since 1984, a second stint in one of the most glamorous jobs in Ghana, Director-General of the Ghana Broadcasting Corporation. He had been appointed to that position in 1972, but had later been transferred to other public service positions.

How had the Rhodes Scholars Alumni Association made the mistake of describing him as “dead” when he was still alive and kicking? I didn't care at the time – I just wrote to West Africa Magazine to correct the false report. Fortunately, they published the correction. I didn't hear from Fifi, but the next time I was in Accra, he bought me a beer at the Ghana Club. And he did attend my mother's funeral at Asiakwa.

Well, in 2000 AD, had lightning struck twice in the same place? This time, taking no chances, I called Fifi's wife, Charity, herself in Accra, direct. “Yes, Cameron!” Charity confirmed to me, sadly. “Fifi is gone!”

I was heart-broken. I'd met Fifi just after he'd returned to Ghana in 1962 from Oxford University, where he had done a post-graduate course at Oriel College, as the first-ever Black African to be awarded a Rhodes Scholarship.

Rhodes Scholarships, endowed by Cecil Rhodes, an Englishman who had made an enormous fortune in diamond and gold-mining in Southern Africa, were a prestigious honour being enjoyed by English-speaking countries such as the USA, Australia and New Zealand, but denied to Black Africans. (President Bill Clinton of the USA, for instance, had benefited from one, as a young student!)

However, even though blacks had their own highly-regarded University at Fort Hare, in South Africa (where Cecil Rhodes had minted his greatest fortune) no Black South African had ever been awarded a Rhodes Scholarship. Nor had one ever been granted, either, to anyone in the two chunks of territory Rhodes had named after himself – Northern and Southern RHODESIA!

But shortly after Ghana's independence in 1957, it was “learnt” that the Trustees of the Rhodes Scholarship had recognised the absurdly racist nature of their scheme and that they would now include Ghanaians in its awards! Fifi, just about to finish his first degree at the University of Ghana, Legon, became interested and applied, winning the scholarship in 1960.

Fifi had tasted international renown before, having won a New York Herald Tribune Fellowship to America in 1955, with a brilliant essay in a hotly contested world-wide competition. Once in the US, he distinguished himself by appearing in a TV programme with a racist white South African girl student, whose unabashed racism Fifi tore to shreds – very politely!

Fifi's enlightened – somewhat precocious – attitude towards the Rhodes scholarship was that since the money of Cecil Rhodes had been obtained on the backs of black Southern Africans (whom he had paid very little for extremely hard, slave-like labour) it was only fair that some of Rhodes' money should finance the high education of Africans from West Africa, who would, hopefully, use their education to help free their brothers and sisters in Southern Africa.

Upon graduation, Fifi never forgot the pledge he must have made to himself to fight for “the total liberation of the entire African continent” – the same pledge that President Kwame Nkrumah had called on the people of Ghana to make to their fellow Africans under colonial rule, on the night that Ghana achieved her own independence, 6 March 1957.

As a working journalist, I remember making many broadcasts with Fifi on African affairs on Radio Ghana, after he had returned from Oxford. He was then assisting the Black American sage, Dr W E B Dubois, in setting up the Encyclopedia Africana Project, at the special invitation of President Kwame Nkrumah. I believe that President Nkrumah had wanted to employ Fifi in his own office himself, but felt that Dr Dubois, who was very old at the time, would need an energetic Ghanaian intellectual to help him establish himself well enough in the country, and on the African continent – in practical terms – to make the Encyclopedia Africana project take off and become a success. Hence he gladly “seconded” Fifi to Dr Dubois.

As Editor of DRUM Magazine at the time, I had met Fifi at the residence of Charity Caesar (soon to become his wife) near the Korle Bu Hospital, Accra, on the insistence of DRUM's ace Photographer, Christian Gbagbo (who had met Fifi whilst carrying out several photo shoots of the beautiful and fashion-conscious Charity for the magazine).

I got Fifi to write an article to tell the Magazine's readers about his days at Oxford, and to make comments about the social improvements that he felt Ghana needed to make. I discovered how eloquent he was when he (for instance) described Accra's ageing buses as vehicles that “belched smoke like chimneys!”

But he wasn't all about serious matters. It was he who introduced me to the humorous, almost too explicit, songs of the West Indian singer, Mighty Sparrow, as well as the world-famous British group, the Beatles. We soon became inseparable as the two “sports-car aficionados” of Accra, hanging out mainly at the Ghana Press Club, where we were often joined by his fellow-Oxonian, the Jamaican novelist, Neville Dawes and his Legon house-mate, George Awoonor-Williams.

It was also through Fifi that I met some of the most articulate Oxonians then teaching at Legon, including Professor Willie Abraham (whom I featured in Drum Magazine) Bachelor Folson (who contributed ideas to me on economics) and Kwame Arhin. I also met the renowned expert on African religion and culture, Professor Kofi Asare Opoku, through Fifi.

It is quite impossible to describe Fifi to people who were not blessed enough to have met him. Witty; savvy; mischievous; obstreperous; generous: the epithets keep tumbling out when he is mentioned. Among the people who have missed his presence most, over the past twenty years, have been, of course, his wife, Charity, who has become a by-word for fashionable couture in Accra; his son, Nii Kofi Yeboa, currently a pilot with Qatar Airways; and his two daughters Kwaakoa (Leonora, his eldest child) who is a lawyer, and Naa Kwaley (Ruby his second daughter, who is a doctor).

He would also have been badly missed by the many friends he made as Director-General of the Ghana Broadcasting Corporation in his first stint (from 1972 until 1975); an Administrator in the Ghana Civil Service; Principal Secretary at the Ministry of Education and later, as a member of the Castle Administrative Corps. In 1984, he was invited to go back and head the Ghana Broadcasting Corporation a second time as Director-. His last posting was at the Public Services Commission, of which he was a member until he passed on 18th October 2000.

Fifi, this is your soul-mate, AKWASI, saying: My Brother, Do Rest In Peace! We are all diminished because – you are no longer with us!