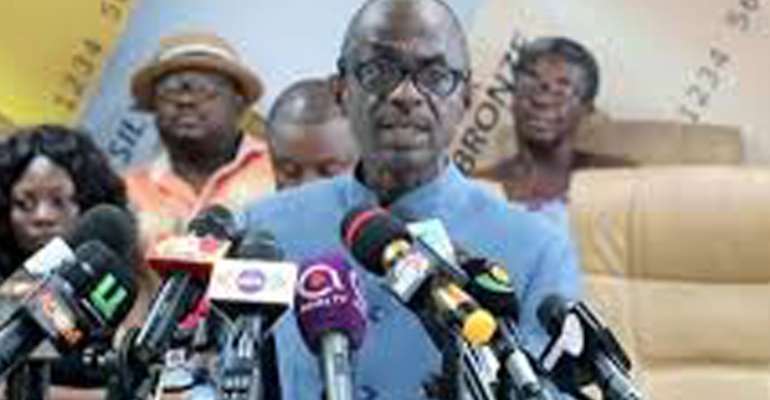 The Ghana Armed Forces (GAF) has shot down claims by the opposition NDC General Secretary, Johnson Asiedu Nketia, that 4,000 weapons have been removed from the armoury of the military for distribution to non-state actors on December 7.

In a statement, GAF Public Relations Directorate pointed out categorically that “these allegations are totally false and malicious” adding, “There is no iota of truth in them. We therefore demand a retraction of the false publication and an apology. We also urge the general public to totally disregard the false statements.”

As an institution, the military pointed out that it hardly responds to political commentaries, “however when factual inaccuracies are peddled against it, the GAF has a duty and responsibility to set the record straight.”

The truth, according to the military, is that “no weapons have been moved out of its armouries and neither have any uniforms been issued or planned to be issued to any group as alleged.”

The military has assured that it will continue to carry out its constitutionally mandated roles “in a robust and professional manner, regardless of any attempts to draw it into the political fray.”

In a related development, Defence Minister Dominic Nitiwul has also rubbished the NDC, stating that there is no such removal of weapons from the armouries of both the military and the police “as far as I am concerned”.

On another allegation about the import and clearance of assault weapons by non-state actors, the minister said such firearms can only be imported into the country upon the signing of an end user's certificate.

“I can state on authority that I have never signed any such certificate since assuming office as Defence Minister. An end user's certificate is the standard for such imports,” he said.

“Let Asiedu Nketia tell us which individual or company has moved weapons from any security agency in the country or imported same into the country. If there is evidence, we shall arrest and prosecute accordingly,” he told DAILY GUIDE.

The NDC officer, he went on, “is only being mischievous. He is inciting the public against uniformed personnel. This is the situation Asiedu Nketia seeks to create in the country.”

The NDC General Secretary recently alleged that government had removed from state armoury over 4,000 weapons for distribution to, as he said, to vigilante groups associated with the NPP.

The distribution, he said, was part of the ploys of the NPP government to disrupt the December 7 polls.

“We are aware that the government is distributing more than 4,000 weapons from the state armoury to his vigilantes. I am telling you, I'm not afraid…when they ask you, mention my name; they should come and ask me…,” he said on Adom TV.

He added, “I have the registered numbers of all these weapons. I can only talk about it in the media and that is what I'm doing or do you expect me to go and buy some of the weapons or fight the government to take those weapons from them.”

Government, he went on, is preparing military uniforms as well for the vigilantes who will be deployed on December 7 under the guise of being members of the Volta separatist (Homeland Study Group Foundation) to disrupt the elections in the Volta Region.

“Because of this, they intentionally broke into the state armoury under the disguise of the secessionist so that when there is any violent activity during the elections, the blame will go to them [secessionist]. Every weapon has an ID number with a certificate to purchase, in case there is any violent activity with the state weapon, the weapon can be traced and even know the manufacturer,” Asiedu Nketia said.