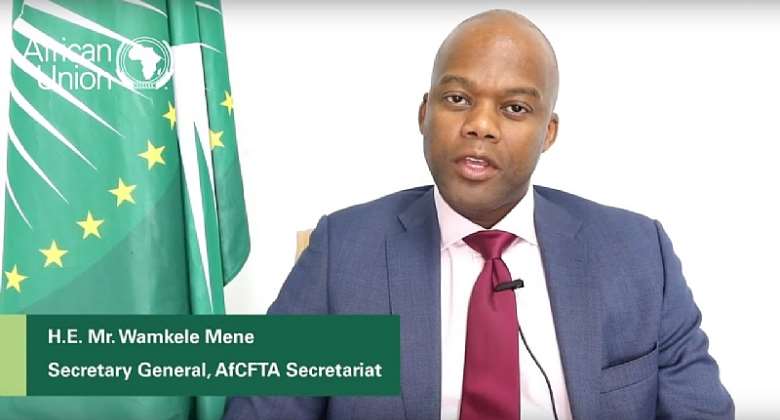 The Secretary-General of the African Continental Free Trade Area (AfCFTA), HE Mr. Wamkele Mene has indicated that the AfCFTA is a timely intervention to address the Coronavirus pandemic to help achieve the social-economic transformation of Africa.

The deadly disease which was first recorded in China gradually became a pandemic and just like other countries, has had a massive impact on Africa and all the countries in the region.

For HE. Wamkele Mene, the existence of the AfCFTA will provide the needed atmosphere for the continent to survive the impact.

Addressing a news conference in Accra, the Secretary-General insists that the AfCFTA is a timely and critical intervention in addressing the Covid-19 pandemic and achieving the social-economic transformation of Africa under Agenda 2063 through trade and industrialization.

HE Mr. Wamkele Mene made this known on October 15, when he engaged the Diplomatic Community from the Africa Member States in Accra over a working lunch at the Movenpick Hotel.

Although the pandemic is expected to result in a loss of 25 to 30 million jobs in Africa, the AfCFTA holds out good prospects as a growth pole for reviving the African economy which over the last three decades has grown above world averages and has had some of the fastest-growing economies in the world.

Moving forward, HE Mr. Wamkele Mene says it is critical for all outstanding negotiations on rules and origin and market access to be completed and the instruments widely publicized so that stakeholders can use them in planning their investment, production, and trading strategies.

According to him, Government implementing agencies have in place all the required trade and customs documents and have the institutional readiness to facilitate trade under the AfCFTA.

The AfCFTA Secretary-General adds that economic operators should be made ready with orders and consignments to begin actual trading using the AfCFTA regime.