Utilize Social Media NOW for your Business: 10 reasons why. 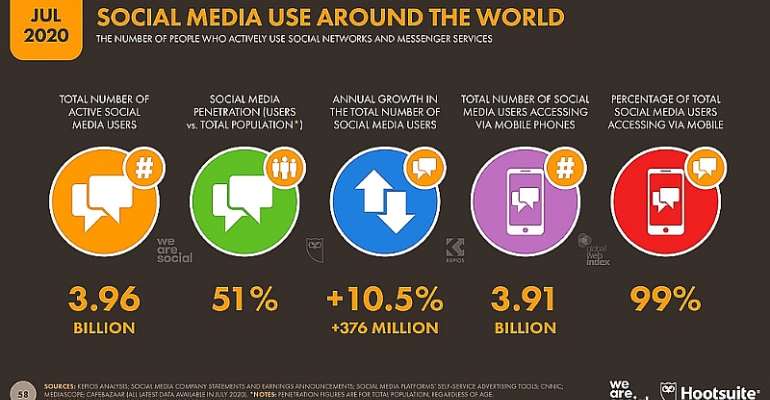 The POWER of Social Media is an easier sell to we the Generation Y business owners (1981-1996). We have a relatively healthy grasp of the before and the aftermath of the internet boom. This aforementioned power of social media is pretty obvious to Generation Z (1997-2012); that’s all they’ve known since they became “aware”.

The math tells us that there are 3.96 BILLION active social media users as of three months ago. That word “active” means that many more accounts have been created and almost 4 billion of them are not dormant; they are regularly used.

Considering that there are currently over 7.8 billion people in the world now, that’s half of the entire world population. I wish I could add the statistics for Ghana’s social media activity. I will take Selassy’s advice and write these articles earlier and on time but in the meantime, I could bet you one pesewa that your target market is on the internet, RIGHT NOW.

The frequent question is, how do you reach them? That’s not what I’m addressing today. It should make for a good follow-up article next week.

WHY YOU SHOULD REACH THEM is what we are deliberating. Here are 10 reasons why.

1. The first one is obvious, MORE SALES. The principal aim of most businesses is to sell the goods or services that they’re set up for. Half of the world is on the internet actively engaging with other people and businesses. If you aim to reach more people and get more engagement with prospective customers, social media will play a vital role. The world is getting more and more digitally interconnected and social media is the present and future of marketing.

2. Social media engagement GENERATES REAL BUSINESS LEADS. These are real people. In a pandemic, the world has readily embraced the need to incorporate digital technology. The people that are liking and commenting on the content that businesses put on social media are as real as people standing right in front of a billboard. This is just a quick, easy, and effortless way for potential customers to express interest in your product.

3. Most businesses have a website with the full pitch, the full information about the product or services that will seal the deal with any interested and ready customer. The problem is, not everybody knows your company, or where to get the necessary info to make a decision. Social Media can INCREASE YOUR WEBSITE TRAFFICwhen it’s designed to direct people to your website. There’s already a lot of traffic between social media user accounts. When you’re part of that traffic, any engagement with your social media handle can very easily direct people to your website.

4. Also, by indulging in all this social media engagement together with half of the world, you MAKE YOUR BRAND RECOGNISABLE. I don’t have the stats but I could bet you another pesewa that customers would choose brands they have interacted with on social media rather than totally strange ones. By staying on the minds of the public, you increase your chances of actually closing a sale when the opportunity presents itself or when a customer is ready to buy. You humanize your brand and make your company easily accessible and approachable.

5. By making yourself recognizable, you INCREASE BRAND AWARENESS. It’s true that 60% of Instagram users discover new brands on social media. Don’t lose out on that. Social media companies are mainly driven by their ability to display ads to a targeted audience. So, when you join social media, you can promote your ads. It can be a picture with a simple message. Or a short video with whatever message you want to convey. It’s relatively inexpensive and very easy to get the assurance of a lot of eyes on your message at very little cost.

6. Also, you get to USE SOCIAL MEDIA INFLUENCERS. Just like on TV, there are some people that are popular and powerful on social media. Studies show that word of mouth has about a 50% chance of swaying a purchasing customer. When someone is actually ready to buy a product or procure a service, a good word from their favorite personality on social media can help. And it doesn’t have to be a big shot celebrity. There are equally long-reaching accounts on social media that are run by normal people that will charge you a fraction of what the big celebrities will.

7. Imagine GOING VIRAL. Just imagine it. Imagine being as viral as Big Shaq. He went viral because of the content he made during a radio interview… RADIO! Yet, it wasn’t radio and TV that made him a household name. It was social media. YOU or your business stand a chance of going viral should your content resonate with the masses. When that happens, for however long it lasts, you will have Ghana’s attention… technically half of Ghana but that’s still a massive lot of people to introduce your business to.

8. It’s possibly never happened to you, and I hope it doesn’t, but if a crisis does befall you, then you don’t want to not have a strategy for SOCIAL MEDIA CRISIS MANAGEMENT. It is crucial because in the times we find ourselves, it is social media that disseminate information the quickest. If your company ever has a crisis and word needs to be put out fast and well, you will need a social media plan. To execute an effective social media plan, you have to have been active and engaging with your target audience on social media.

9. Regardless of crisis, smart companies frequently execute REPUTATION MANAGEMENT strategies. During all the interactions that happen on social media, one could influence how others think about and perceive your company. It’s better to get ahead of it. Your current and prospective clients are discussing your product. They’re looking at the good sides and the bad sides to choosing your company. If you follow very carefully, you can contribute to throwing more light on the positive and address the negative before it turns into a full-blown crisis.

10. Social media is accessible to anyone with the internet. It means you will see what your competitors do and have many other ways to MONITOR YOUR COMPETITORS. It means you’ll be able to tell when they put out important information, when they launch new products, and when they alter their way of doing things. Your competitors are your competitors because they’re doing something right and staying in business. Through social media, while you monitor opposition strategies, you can capitalize on what they’re doing wrong by offering a better experience to win over customers.

I remember a time when you’d have to get a flat-bed trailer truck, get some sound systems with some marketers dancing to popular music while the truck slowly drives through traffic to bring attention to your product, service, or event. It’s called a float! It’s a FLOAT! I remembered the word late but I like the description I gave before so I’ll keep it in.

Well, now, with just the internet and a resonating message, you can reach tens of millions of people in a jiffy as opposed to a street float reaching smaller than a very minuscule fraction of that. Look at the screenshot displayed here. That’s the social media analytics of the 3-day, less-than-a-week, intermittent, non-targeted buzz about the #GhanaEconomicForum on just Twitter.

This is literally magic to the marketers of many decades ago! Get in on that. 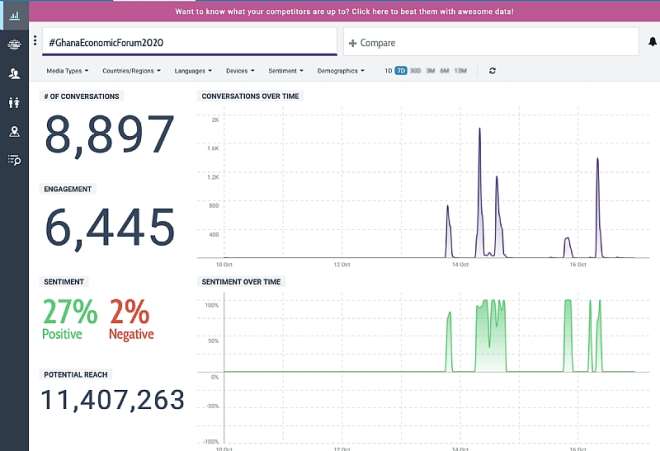 Maxwell Ampong Content Contributor
Macroeconomic Bulletin
Powered By Modern Ghana
The Ultimate Time Management Lesson: Time Asset Vs Time Debt
COVID-19 Vaccine - Why We Need To Start Distribution Preparations.
TechGulf Board Appoints Franklin Asare as Chief Executive Officer To Accelerate Growth Strategy In Africa
What 5G Is – And No, It Does Not Cause Covid-19
EUROBONDS – A Simple Explanation Of What They Are
Beware Of Covid-19 Conspiracy Theories
Desensitisation – A Threat To Fighting Covid-19
7 Strategies to Help You Bounce Back After Slipping Up
Startup Funding 101: Focus on Making Money, Not Raising it!
COVID-19 Updates Live Dashboard
TOP STORIES