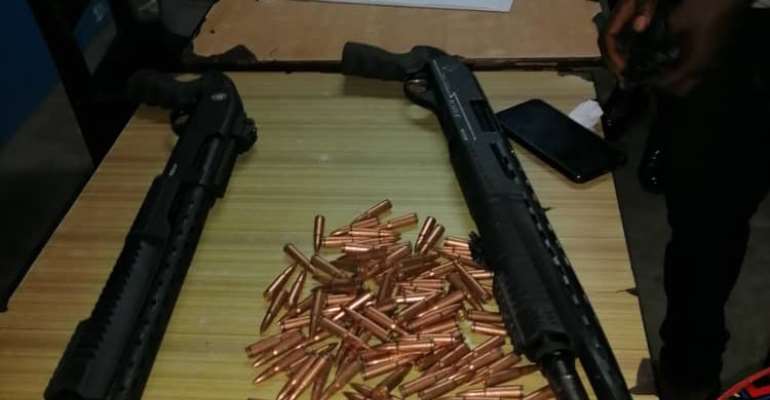 Five persons have been detained and are assisting the police with investigations following a robbery operation of a bank in Lashibi early Friday morning.

The robbers are said to have fired into the vault lock, chiselled the wall and stolen from the safe.

Gunshots from the 2 am operation are said to have attracted a police patrol team who were fired on by robbers who eventually escaped.

A search at the scene led to the retrieval of an electric cutter, chisel, harmer, 11 rounds of live 9mm ammunition, and one spent shell.

The items are now in the custody of the Accra Regional Police Command.

An extension of Police search within the enclave led to the arrest of two suspects; Prince Ankrah and Albert Buckson, who were found in a parked taxi cab with the engine on a few meters from the scene.

They are suspected to have been on surveillance duty for the robbery.

Reinforcement patrol teams to the robbery scene also intercepted an urvan bus suspected to be linked to the same robbery but its occupants on seeing the police escaped.

It was in the urvan bus that the police retrieved the two pump action guns and AK47 ammunition.

Currently, the two suspects and the three private security details who were on duty at the time of the incident are all being detained to assist in police investigations.