Politics Is For Dev't, Akufo-Addo Has Kept His Promise; Give Him Four More Years – Samira To Krobos 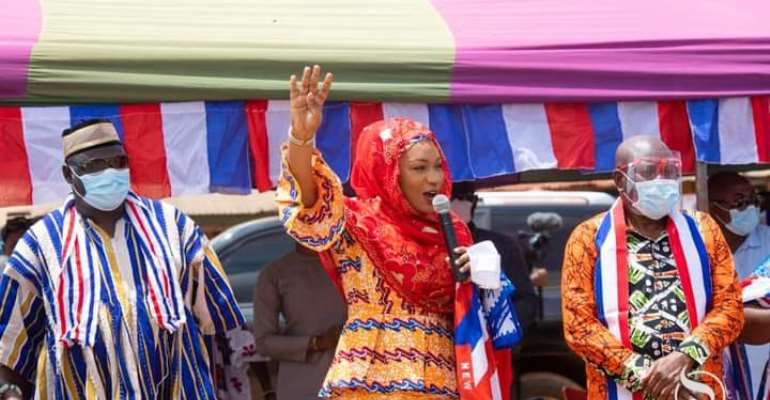 The Second Lady Samira Bawumia says President Akufo-Addo has fulfilled promises made to Ghanaians and therefore deserve to be given for more years in office.

According to Samira Bawumia, politics is for development, therefore, a government which has introduced major policy interventions such as the Free Senior High School Policy, One Million Dollars per Constituency, Planting for Food and Jobs and many others, deserves another term to transform the country.

The Second Lady said this Thursday while addressing the Chiefs and People of Upper Manya Krobo Constituency in the Eastern Region as part of her five-day campaign tour of the region.

She added “in the last three and half years look at what has happened to this country. Over 1.7 million children across this country are enjoying free education, it is unprecedented in the history of this country. His Excellency President Akufo-Addo is saying irrespective of your background either rich or poor, your place of birth he wants every Ghanaian child to go to school. That is the leadership that we want. Look at the policies he has brought – One Million one Constituency. We were in this country when launching was held that Dubai has come to Ghana. We spent hundreds of millions of dollars on Circle interchange, did you see any development here in Asesewa”.

Samira Bawumia posited that President Akufo Addo’s quest to ensure uniform development across the country led to the introduction of “One Million Dollars per Constituency policy”.

She appealed to the electorate in Upper Manya Krobo to retain the Member of Parliament for the area Joseph Tetteh who snatched the seat from the NDC on 2016.

“I came here to request for your vote for our candidate Joe Tee and indeed you voted for him and he’s been a servant leadership. He has demonstrated that leadership is for service. He has worked hard. Vote for him again come December 7 “.