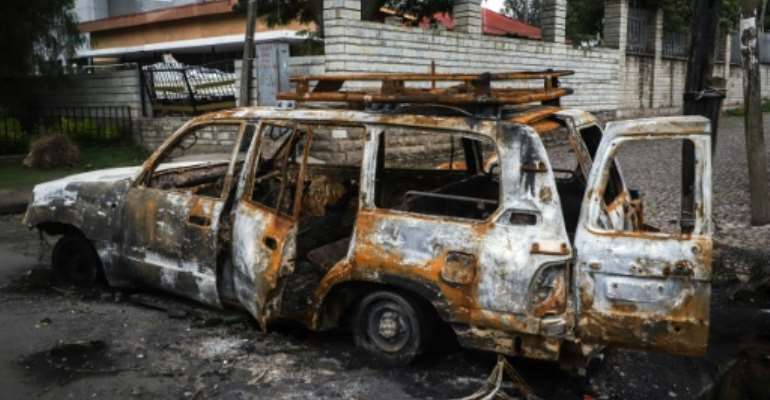 Daniel's Ethiopian Human Rights Commission is taking on a bigger public profile, denouncing abuses including the use of lethal force by soldiers and police against unarmed demonstrators. By - (AFP/File)

This time around, as the country prepares for landmark polls next year, Daniel is in a very different position: as head of the national human rights body tasked with ensuring Ethiopia curbs the same authoritarian tactics that once landed him behind bars.

With that goal in mind, Daniel's Ethiopian Human Rights Commission is taking on a bigger public profile, denouncing recent abuses including the use of lethal force by soldiers and police against unarmed demonstrators.

In an interview with AFP, Daniel, who was appointed last year, said Ethiopia faced a "very deep human rights crisis" that shows little sign of abating.

"Unfortunately, the political crisis is far from getting any solution, in terms of the polarisation of politics in the country and how that polarisation is unfolding along ethnic lines, along religious lines and sadly fuelling violent conflict," he said.

"Ethiopia, it seems to me, is going through the pains of transition from repressive rule to democratic rule."

Daniel inherited a commission that had scant credibility among international activists.

Despite unmatched access to political prisoners, for years it did little to raise awareness about abusive detention conditions, let alone improve them, said Laetitia Bader, Horn of Africa director for Human Rights Watch.

"It was clear that there was no interest politically in giving them the space to work on sensitive or controversial topics," she said.

The pattern persisted through protests that brought Abiy to power in 2018.

In a 2019 report, Amnesty International accused the commission of a "brazen bias against victims".

The commission is finalising its first major investigation under Daniel: a look at days of turmoil that left more than 160 dead following the killing in June of pop star Hachalu Hundessa from the Oromo ethnic group. By - (AFP/File)

After Abiy tapped him to lead the commission, Daniel began overhauling its staff and searching for external funding to supplement its "very tiny" annual budget of 85 million Ethiopian birr (around $2.3 million).

It is currently finalising its first major investigation under Daniel: a look at days of turmoil that left more than 160 dead following the killing in June of pop star Hachalu Hundessa from the Oromo ethnic group.

This type of probe "needs to be led and needs to be championed by Ethiopians themselves," said Daniel, who previously worked for both Human Rights Watch and Amnesty.

Daniel has defended the government in some cases.

After Amnesty published a report in May accusing security forces of committing 39 extrajudicial executions in Oromia, Daniel told a regional broadcaster that, while the reported killings were "shocking", researchers had "failed to give proper, adequate context".

In the interview with AFP, he declined to echo groups like Amnesty and Human Rights Watch that are warning about a return to repressive practices.

More than 9,000 people were arrested in the aftermath of Hachalu's killing, and some 5,728 have been charged in connection with the violence.

"It's a large number of people to be detained, but it's also important to recall about the large scale of the violence," Daniel said when asked about the arrests, adding that judicial proceedings so far were "reasonably fair".

The suspects include opposition politicians who insist the cases against them are politically motivated.

"It's a bit early to make a judgement on this," Daniel said. "It's not very surprising that political opponents would consider any move against them as politically motivated."

As for the coming elections, which have yet to be scheduled, Daniel said he would work to keep human rights issues "front and centre" before, during and after the voting.

"Unless this election is credible, is free and fair, it's going to be a big setback for Ethiopia's attempt for a democratic transition," he said.

Ghanaians suffering due to mismanagement by Akufo-Addo, Bawu...
11 minutes ago