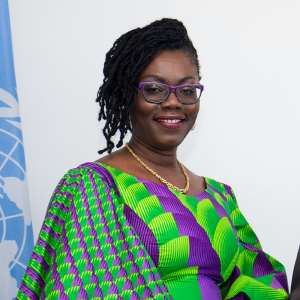 The management of Ghanapoliticsonline.com has expressed disappointment in the Communications Minister Hon Ursula Owusu for a post she made on her official Facebook page labeling the website and some nine other online portals as fake and affiliates of the main opposition National Democratic Congress (NDC).

In a statement released on Tuesday, 15th October, 2020, the management of Ghanapoliticsonline.com stated that the media outlets are duly registered with the National Communications Authority and the Private Newspaper and Online Publishers Association of Ghana (PRINPAG) so allegations of being fake are unfair and uncalled for.

Management urge readers to continuously follow the website for accurate and balanced reportage and called on the other media outlets to support each other and improve democracy in the country.

Read full statement below;
RE: FAKE NDC NEWS PORTALS-URSULA OWUSU
The management of Ghanapoliticsonline.com has sighted a publication on the Communications Minister, Ursula Owusu’s official Facebook page that states that the above-mentioned online portal and some other nine websites are affiliated to the opposition National Democratic Congress and therefore are fake.

It is rather unfortunate that the Ursula Owusu who is supposed to competently oversee effective communication, support media outlets and promote democracy in the country has launched an attack on a section of websites after closing down numerous radio stations based on unreasonable and inadequate facts.

Ghanapoliticsonline.com has over the years provided News with verifiable facts and engaged in in-depth reportage of happenings in our dear country without fear or favor and we are therefore disappointed with such low attitude towards us and our other colleagues.

The team believes in the tenets of democracy, upholds the principles of journalism and has accordingly exhibited fairness and accuracy in our reportage.

It is imperative to note that Ghanapolitics Newspaper and Ghanapoliticsonline.com are duly registered with the National Media Commission and the Private Newspaper and Online Publishers Association of Ghana so allegations of being fake are neither here nor as claimed by the minister.

The Communications Minister must render an unqualified apology for such unfitting and unsubstantiated descriptions albeit exposing her biases towards the very institutions she is obliged to regularize and guide if indeed she upholds the political power and respect for Ghanaians in high esteem.

The management of Ghanapoliticsonline.com will decide further actions to take on this public pronouncements by Ursula Owusu.

We urge our readers and fans to ignore the lies churned out by the minister, who obviously do not agree with some content of our reportage alternatively because some portions may not be pleasant to her and her apparatchiks in government.

We promise to continuously update Ghanaians with authentic News from all political divides and other sectors with undiluted accuracy and balance for your reading pleasure.