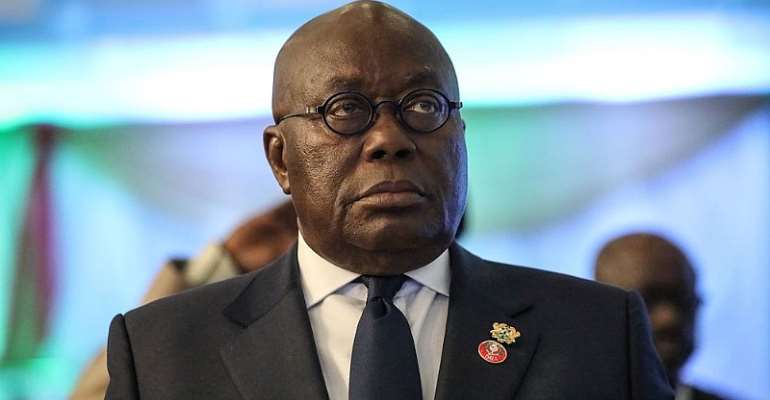 In the run-up to the 2016 general election, Ghanaians were made to understand that the John Mahama administration was the most ever corrupt government in the history of the fourth Republic. This was due to the countless unsubstantiated corruption scandals the then opposition party levelled against the John Mahama government.

In 2016, Ghanaians never believed any answer H.E John Dramani Mahama gave in relation to the corruption allegations. Our opponents were indeed using our own party members who previously served as ministers to concoct fallacious corruption stories against the NDC. Our own Martin Amidu who had previously sworn to serve the people of Ghana with Truth and Faithfulness as a renowned lawyer was promised to be given appointment, hence, was used as tool to paint his brother black.

He succeeded in doing so and was rewarded as Ghana's Special Prosecutor. During his vetting, president Mahama was vindicated when he was ask if he can adduce any evidence to show that Mahama was corrupt. Surprisingly, this man replied that anything he said then was based on mere suspicion.

Fellow Ghanaians, the saddest of all is that the Akuffo Addo government has been in government for almost four years yet has not been able to prosecute John Mahama for all the frivolous corruption allegations levelled against him. This underpins the fact that President Mahama is Ghana's Junior Jesus but was deliberately tainted.

But something is worrying which must be of a concern to every Ghanaian. Since Nana Akuffo Addo assumed office, his administration has been hit by numerous corruption scandals whom he has been silent on as to how he tackled those scandals in his campaign message.

Ghanaians want to know, why president Akuffo Addo is not talking about BOST scandal which was supervised by his own darling boy. Ghanaians want to know how president Akuffo Addo implemented the nine member Committee's Report which described the management of BOST as criminal worth of prosecution. Why did he decide to force Alfred Obeng to resign instead of prosecuting him to the extent of having the guts to use the proceeds from this scandal to contest and win as a Parliamentary candidate for NPP. Do you know why he is silent on it? It is because he is a direct beneficiary to this scandal and talking about it will mean "washing his dirty linen in public". That is how dishonest our president can be.

Ghanaians want to know. Why is President Akuffo Addo silent on the PDS scandal which was deliberately planned to strip dubious sums of money from the poor Ghanaian. Why is he silent on prosecuting his friends and family members who played a central role in this PDS daylight thievery which robbed 1.5 billion cedis from the poor Ghanaian. Do you Know why? He is dishonest and only came to enrich himself and family members.

Ghanaians want to know. Why is President Akuffo Addo silent on Osafo Marfo's one million dollar payment to Kroll Associate for no work done. Do you know that the money could have been used to complete Mahama's Community Day Senior High Schools which will end the hectic double track system. But for corruption, it ended up in one person's pocket whom president Akuffo Addo is a direct beneficiary so he is muted on it.

Ghanaians want to know. Why is President Akuffo Addo silent on the Australian Visa racketeering scandal which indicted the deputy sports minister, Pius Hadzide as the orchestrator. Why is Akuffo Addo shielding Pius Hadzide by failing to implement the Committee's report and reappointed the corruption kingpin to be the deputy minister of information. That is the person whom they touted to having zero tolerance for corruption.

Ghanaians want to know. Why is the president silent on the Agyapa Royalties deal which is intended to mortgage and entrust our mineral royalties to his family members? He will never utter a word on things like this because he is dishonest and only came to make sure that his family achieve financial might.

Ghanaians want to know. Why is the president silent on the heartbreaking missing 700 motorbikes, 600 tricycles at the Northern Development Authority. Can president Akuffo Addo be honest for once and prosecute the perpetrators of such act? No! Because the Development Authorities were solely created to supervise such corrupt practices because the president's family members are doing it and he isn't talking about it what is wrong if they also do it.

Ghanaians want to know. Why is the president not talking about the 500 seized galamsey excavators, seized Gold bars worth $150 million, guns and pickups from galamsey sites. It will be prudent for him to come clear on this and tell Ghanaians, the whereabout of these properties. People are dying because of the wickedness meted to galamsey and small scale miners, yet you allow party faithfuls to engage in illegal mining to fund the NPP party. You see, it is heartbreaking to see a president whom we entrusted our will to protect and preserve our economic activities give such unfair treatment to some section of the population.

In conclusion, President Akuffo Addo is not talking about these scandals on campaign platforms because he knows he supervised it, something we were told he hated most not knowing he is the General Overseer of all forms of corrupt activities. He has legalise corruption for the first time in history, such that any of his appointees can engage in it and go scot free without prosecution. Let's kick this corruption soaked, nepotiscally paramount Akuffo Addo government out. Four years of bad leadership is enough.