Where We Built Hospitals I Know, In Agric I Know, In Oil I Know, Port Expansion I Know; Choose Your Sector And Debate Me — Mahama To Akufo-Addo 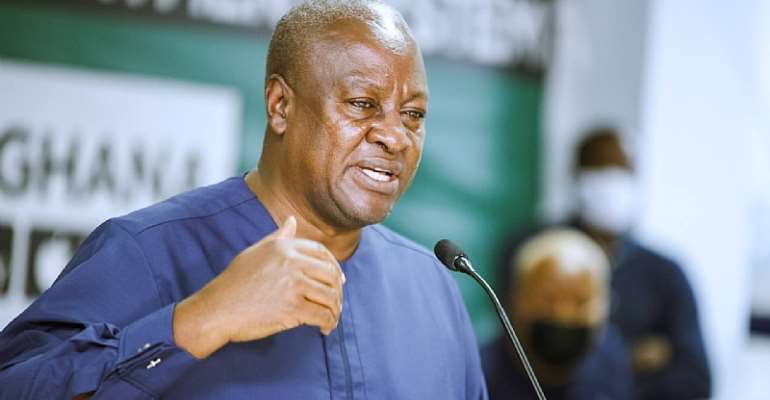 Former President John Dramani Mahama, has repeated his challenge to President Akufo-Addo for a one-on-one debate on any sector of his choice.

According to Mr Mahama, with regard to track records, the President is in the better position to explain to Ghanaians his achievements, if he has really achieved as much as he claimed.

The NDC flagbearer was speaking on Elmina-based Brenya FM on Thursday, 15 October 2020.

Mr Mahama indicated that he is well-schooled on the achievements of his administration and can openly talk about them at any time.

“Now, I don’t know what to say. He says he won’t do it. The President himself says this election is about track record and who else is in a better position to talk about his track record than the person himself. I was head of government, so, I know what we did in our four years or even in our eight years when I was vice-president.

“I know everything. When it comes to healthcare, where we put up hospitals, polyclinics; I know. Where there was a port expansion, I know; petroleum sector oil fields, Sankofa and TEN field, I know.

“Agriculture, what we did in that sector, I know. So, I can defend my record,” Mr Mahama said.

He, therefore, challenged President Akufo-Addo to engage him in a debate on whatever topic he deems appropriate.

“Healthcare, education, even free SHS, he should come, we’ll debate, I’m not restricting it. Whether policy, infrastructure, track record, whatever, wherever he wants the debate held, his house, whoever will host it, I’m ready to debate him.”

Mr Mahama further noted that it is not too late to hold the debate as there are seven more weeks to go until the December polls.

“You’ll go and put something out there that ‘I took Karpowership from Tema to Takoradi’ but who brought the Karpowership in the first place? You delayed the Karpowership in Tema for one year, it should have been in Takoradi producing with gas by now, and many other things. ‘You solved dumsor’; even one megawatt of power, you haven’t produced.

“So, he should come and sit here, there are two microphones here, he would have been sitting there, then I would be sitting here, then we’ll speak for Ghanaians to hear him. So, as for the debate, the challenge is still on, we’ve about seven weeks to go, it’s not too late.”