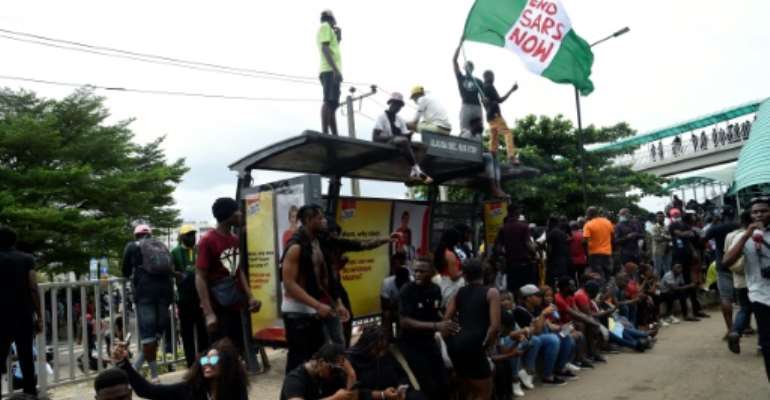 Since the protests began, the government has been forced into rare concessions and has promised a raft of measures to try to appease the popular ire. By PIUS UTOMI EKPEI (AFP)

Thousands of Nigerians staged fresh demonstrations on Thursday against police brutality as the army issued a warning against "subversive elements" and authorities banned protests in the capital.

The protests have largely been peaceful, but Amnesty International said at least 10 people have been killed and hundreds injured in the face of "excessive force" by police.

In a statement early Thursday the military cautioned "all subversive elements and troublemakers", saying it "remains highly committed to defend the country and her democracy at all cost".

The Nigerian Army "is ready to fully support the civil authority in whatever capacity to maintain law and order and deal with any situation decisively", a spokesman said.

In the capital Abuja, authorities announced a ban on protesting on Thursday citing coronavirus restrictions after flag-waving demonstrators headed to the national assembly.

"The unruly conduct of the crowd and manner of demonstrations are in complete violation of the COVID-19 safety protocols," a statement said.

In recent days demonstrators have increasingly complained that plainclothes assailants have assaulted them and tried to disrupt the protests.

"Thugs wielding machetes, knives, axes, who we believe are paid most probably by the government attacked protesters on the ground," demonstrator Princewill Iweajunwa told AFP in Lagos.

"Many were injured, phones, money and other personal possessions robbed."

Amnesty International said "sponsored armed thugs have so far unleashed violence on peaceful protesters" in a string of locations.

The governor of Lagos condemned the attacks on demonstrators and pledged law enforcement officers would protect them.

Since the protests began, the government has been forced into rare concessions and has promised a raft of measures to try to appease the popular ire.

The country's police chief announced on Tuesday that the SARS unit was being replaced by a new SWAT outfit, but protesters were quick to reject this and push for more sweeping change.

In response the Nigerian police insisted that no members of the former unit would be eligible for the new one, promising that its officers will be "barred from indiscriminate and unlawful searches".

The protests have drawn thousands of mainly young demonstrators onto the streets and online in the most concerted show of people power in Nigeria in years.

Crowd-sourced donations have poured in for the largely leaderless #EndSARS movement, supporters said.

Protesters barricade a pedestrian crossing the Lagos-Ibadan expressway during the demonstration to protest against police brutality. By PIUS UTOMI EKPEI (AFP)

The collective said it had paid legal fees and medical bills for injured protesters, donated to families of victims, and bought food, water and face masks for people at demonstrations.

While the protests have rocked mainly Christian southern Nigeria they have not taken off in the predominantly Muslim north of the country.

Crowds there have called for reforms to SARS but not for the unit to be scrapped as it is seen as helping to fight rampant insecurity in the region.

"In fact, SARS is largely seen in the north as a good security outfit in combatting armed robbery kidnapping and other violent crimes."

MPs split heads as anti-LGBTQ+ bill to be laid in Parliament...
5 minutes ago

Angola President in Ghana for 3day visit
10 minutes ago