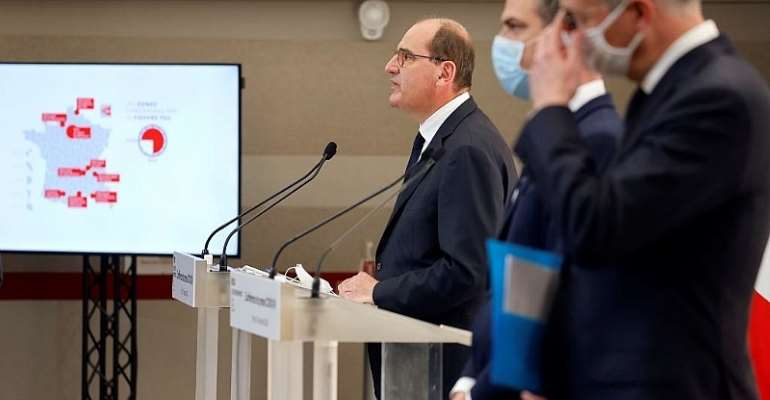 French Prime Minister Jean Castex justified the reasons for the government's decision to impose a curfew in nine cities across France as of Friday midnight. He called on the French to limit gatherings to six people in both private and public spheres.

Accompanied by four of his ministers, French prime minister Jean Castex, speaking at a press conference, explained that the new rules in place are designed to curb the spread of Covid-19, announced by President Emmanuel Macron on Wednesday,  and will stay in place for at least four weeks, with a possible extension if approved by MPs.

"This crisis will end one day," he said, "and at that point we will be able to truly learn from what happened," insisting that in the meantime prevention was paramount.

He emphasized collective responsibility and the need for citizens to respect health restrictions in both the private and public sphere – limiting gatherings to only six people.

This comes as public health authorities reported a further 100 deaths in the last 24 hours and 193 people in intensive care.

"It's not the state that's attacking us, it's the virus," he said of the measures, calling for a spirit of solidarity of the French public.

On top of the 9pm-6am curfew in place in nine major cities across France, Castex said that private parties and weddings could no longer to be held in public buildings, a rule which would be applied nationwide.

Interior minister Gérald Darmanin said a justification letter will be required for anyone needing to stay out past the curfew, with a letter from the employer if necessary, much like during the lockdown.

12,000 police officers had been designated to enforce the curfew, with people facing fines of 135 euros for no justification and 3,750 euros and prison time if caught a second time.

Bonuses for medical staff
Exceptions to the curfew would include going to work, or seeking medical treatment, going to the pharmacy, to visit dependent family members, to take care of pets, or to take a train or plane booked outside curfew hours.

Castex spent time addressing the concerns of medical staff, under severe strain and in some cases obliged to cancel autumn holiday plans.

He said the two planned salary raises for hospital workers (except doctors) set for March 2021 would be handed out before the end of the year, and medical staff who cancelled their holidays would receive compensation of 110 to 200 euros per day to cover these periods.

Responding to critiques which pointed to a lack of intensive care beds across France, he said the solution was not to increase the number of beds exponentially, for which it would be impossible to train enough staff, but rather to insist on prevention to avoid the situation getting worse.

Health Minister Olivier Véran concurred on this point, saying that France had all the equipment it needed "to face a second wave if necessary," indicating that the number of permanent intensive care beds had gone from 5000 to 5,800.

At the peak of the first wave of the epidemic in April, there were 7,000 patients.

Veran is one of several current or former ministers being probed over their response to the pandemic following complaints by victims of Covid-19 that they were slow to act to check its spread.

New testing methods
In terms of Covid testing, Véran said that France had made up for any delays and that turnaround time on results had sped up.

He also signaled that 5 million antigen tests (using saliva), which provide results within half an hour, had been ordered and more were on their way.

On the economic front, the finance minister Bruno Le Maire stated that all companies of 50 employees or less in the zones effected by curfews would be eligible for solidarity funds of 1,500 euros if they had lost at least 50 percent of their turnover.

For hotels, cafés and restaurants, he said the rescue package could reach 10,000 euros to compensate for losses of at least 50 percent of revenue, a level which used to be 70 percent.

Labour minister Elisabeth Borne said employers were encouraged to define a minimum number of remote working days for their workers and that public institutions would require two to three days of remote working for staff.

Castex also said a bonus of 150 euros would be given to each person on a minimum wage (RSA), increased by 100 euros for each child.