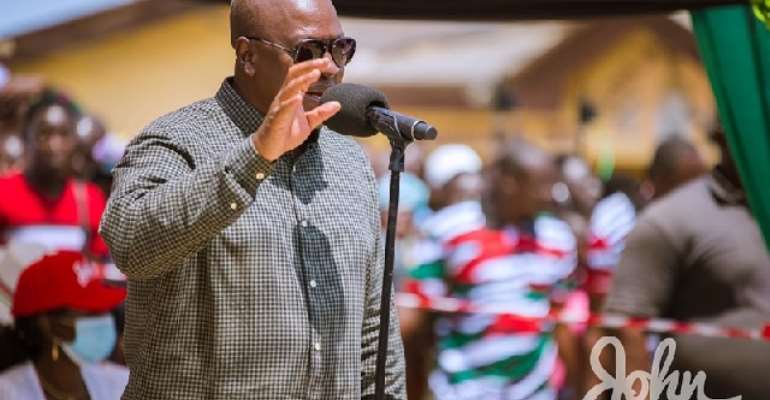 Former President Mr John Dramani Mahama, on Wednesday, 15 October 2020, said his next government will streamline the fishing sector to benefit fishermen and other stakeholders in the industry.

Addressing fishermen at Gomoa Nyanyano in the Gomoa East constituency on the first day of his five-day tour of the Central Region, Mr Mahama observed that fishing inputs, including the distribution of fishing nets and premix fuel, have been hijacked by supporters of the governing New Patriotic Party (NPP) following the government’s politicisation of the sector.

He said in order to help promote the growth of the fisheries sector, the next NDC government will ensure that fishermen take charge of the distribution of premix fuel by forming landing beach committees.

Mr Mahama said “fishing nets and outboard motors will also be supplied to fishermen at a very affordable price”.

He also said the next NDC government will establish a salt factory at Gomoa Nyanyano to create jobs for the unemployed youth in the area.

Mr Mahama also mentioned that the abandoned road network in the constituency will be constructed by the next NDC government.

He therefore urged electorates to vote for him and NDC parliamentary candidates in the December 7 general elections to enable him roll out Free Primary Healthcare for all, provide jobs as well as state-sponsored National Apprenticeship Programme, among others.

Covid-19: Hassan Ayariga under life support after ridiculing...
16 minutes ago

What evil men mean for wickedness God turns it around for go...
31 minutes ago