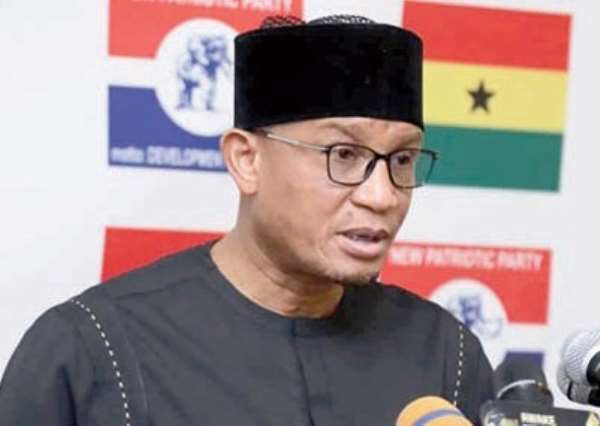 The ruling New Patriotic Party (NPP) has said it will not play a part in the 'old tricks of mischief and falsehood' displayed by the opposition National Democratic Congress (NDC) anytime the country heads into general elections.

The Minister for Zongo Development, Dr. Mustapha Hamid, who doubles as NPP Deputy Campaign Manager, who addressed a press conference in Accra yesterday, said the NDC, sensing an ominous electoral defeat that will be worse than the one they suffered in 2016, is resorting to lies to discredit the EC and create a false sense of insecurity to hoodwink electorate ahead of the general election.

He, however, noted that the NPP will not 'dance' to the tune of the NDC as election 2020 is about comparison of records and not 'vitriolic attacks' as well as the superior leadership qualities of President Akufo-Addo against that of John Dramani Mahama.

“We in the NPP disagree with the NDC in their belief that politics is a dirty game and must be played in a dirty and unethical fashion. We believe that dirty people make politics dirty just as there are dirty people in all professions. But for those who seek to occupy public office, we believe that they more than everybody else, should cultivate a higher sense of responsibility and ethics,” Dr. Hamid stated.

He said the NDC has lost its appeal to Ghanaians as a result of their inferior track records in government, weak campaign machinery and an unattractive flagbearer who suffers a serious credibility deficit and is now resorting to “incessant attacks on the EC, the integrity of its processes and persistent doomsday sensational proclamations to court disaffection for government, with the ultimate aim of salvaging their plummeting electoral fortunes.”

“Through propaganda, the NDC is creating a false state of insecurity in the country to play on the emotions of Ghanaians for electoral gains. He said statements by leading members of the party such as Samuel Ofosu Ampofo, Johnson Asiedu Nketia, Sammy Gyamfi, Inusah Fuseini, among others, affirm the assertion that “the NDC is going dirty” but said “the NPP will not follow them into the gutters.”

“As people who are looked up to by their rank and file, the least this nation requires of them is a sense of decorum and decency and an adherence to basic ethical principles that promote national cohesion and progress,” he added.

Dr. Hamid said that the National Cyber Security Centre has confirmed that an audio circulating on social media purported to be from an international media outlet suggesting that a government official was involved in laundering money to the UK is also fake.

He assured that like past elections, the 2020 general election would be “a test of the political fortitude of the country; and again, the NPP-led government would prove to the world that the peace and democracy of this country reign supreme.”

“To this end, let me use this opportunity to reiterate the assurance made by government that the peace of this country would not in any way be compromised before, during and after the elections. As indicated by President Akufo-Addo, efforts have been made by the relevant state security agencies to ensure that the sanctity of the elections is safeguarded. Hence, this election would undoubtedly pass the test, and Ghana would again emerge victorious,” he stated.

MPs split heads as anti-LGBTQ+ bill to be laid in Parliament...
49 minutes ago