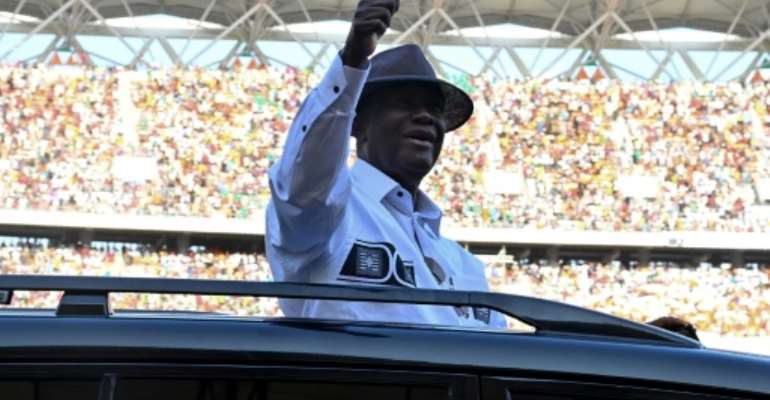 Campaigning starts in Ivory Coast Thursday for a tense presidential election, with incumbent Alassane Ouattara seeking a controversial third term and the opposition pushing for a boycott and civil disobedience, sparking fears of violence.

Many observers fear a crisis may be sparked by the October 31 election comparable to the one in 2010-2011 when 3,000 people died and the West African nation was plunged into chaos.

"All the Ivorian opposition says No, No, No," to a third Ouattara mandate, was the message displayed at an opposition rally in Abidjan at the weekend that attracted tens of thousands of people.

The constitutional council rejected a further 40 would-be candidates including ex president Laurent Gbagbo, 75, and former rebel leader Guillaume Soro, 47, both of whom played key roles in the crisis that engulfed the country after disputed elections in 2010 and claimed some 3,000 lives.

After his re-election in 2015, Ouattara announced in March that he would not seek a third term. But he changed his mind after his preferred successor, prime minister Amadou Gon Coulibaly, died of a sudden heart attack in July.

Restaurants and nightclubs were burnt in Divo after Ouattara announced his candidacy. By Issouf SANOGO (AFP/File)

A wing of Gbagbo's Ivorian Popular Front party (FPI) led by Affi N'Guessan who is one of the contestants, on Wednesday asked supporters not to accept voters' cards.

"For us, the National Election Commission is no longer a competent body to oversee the election," said Maurice Kakou Guikahue, the number two of the historically dominant Democratic Party of Ivory Coast.

During the campaign, Ouattara is expected to point to his record on the economy and attempts to restore the world's biggest exporter of cocoa to its former position as a regional powerhouse.

He is promising a better distribution of growth to the country's poorest and most remote areas.

A man holds a placard reading "Stop to the third term". By SIA KAMBOU (AFP)

Turnout among the 7.5 million people entitled to vote in a country with a total population of 25 million will be a key point.

Observers fear a high abstention rate in a country with a median age of 18.7 for an election in which the two main contenders have been on the political scene for 30 years.

Six die in accident at Hemang after car crashed into wrongly...
20 minutes ago