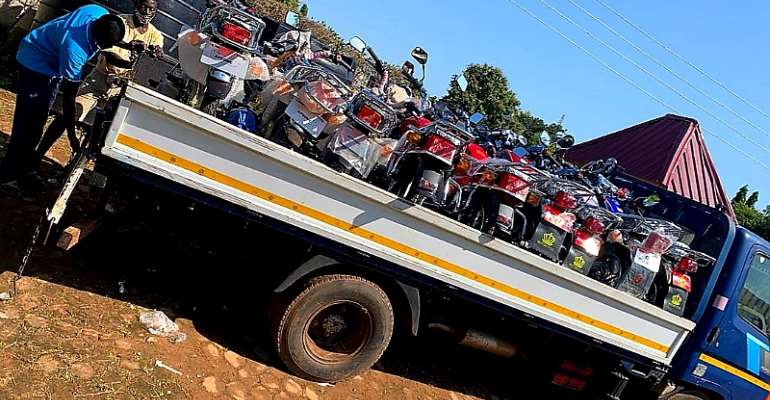 A Presidential Staffer and astute member of the New Patriotic Party (NPP), Napaga Tia Sulemana, has donated ten (10) Apsonic and Royal motorbikes, as well as five (5) mobile sound systems to the NPP in the Nanton constituency of the Northern Region.

A powerful delegation on Monday, October 12, 2020, led by the Northern Regional Chairman for the NPP, Chairman Mohammed Baantimah Samba, First Vice Chairman, Alhaji Sunday, Regional Secretary, Alhaji Sibdoo and other party faithful across the Northern Region were present to witness the event.

Speaking at the event, Napaga Tia Sulemana said the gesture is her widow's might to support the campaign activities of the party in her home constituency, a move to complement their desire to retain the Parliamentary seat and increase the Presidential votes for the NPP in the upcoming December 7 polls.

Receiving the items, constituency chairman, Alhaji Inusah thanked Napaga Tia Sulemana for such a grand donation. He promised that the motorbikes and sound systems will be used strictly for party activities to ensure victory come December 7, 2020.

The incumbent MP, Alhaji Hardi Tuferu who is also the Parliamentary hopeful for the NPP in this year's election in the Constituency, showed appreciation while encouraging his executives not to relent in their efforts to retain the seat for the NPP.

Napaga Tia Sulemana hails from a royal family in Nanton in the Northern Region of Ghana. She has been inactive in politics since her days at the University for Development Studies (UDS), Wa Campus. Her kind gesture has been hailed and commended by all.