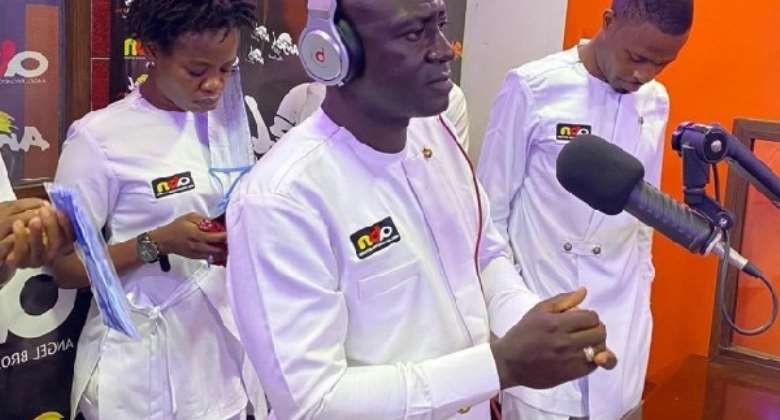 I resolved not to write a political article about Ghana again until the electoral tension subsides; even so, as the erudite Ghanaian lawyer and an obstreperous Special prosecutor, Martin Alamisi Burnes Kaiser Amidu will put it “fate is cruel.”

I did pause from reading my favorite book, “The Gospel according to Judas Iscariot,” an intellectual opus I fell in love with as I found myself in a religious crossroad relative to attending Ghanaian political, egotistical, and hypocritical pastors church again or not. I visited Ghanaweb.com to ferret out what is happening in Ghana.

If Captain Smart of Angel FM and Paul Adom-Otchere of Metro TV all located in Ghana think they can use their media platform to denigrate the learned professor of mine, Naana Jane Opoku-Agyemang, the vice-presidential candidate of National Democratic Congress [NDC], then the duo places themselves in a satirical spoof, carving a niche for themselves not only as partisan journalists but as infantile misogynists.

When journalist, judges, police personnel, and the electoral commissioners sway their tactics toward one political anchor, then the imperative need for civil disobedience would not be a far cry from reality. I am not instigating anybody to disobey any law but appealing to law enforcers to be professional and eschew partisan inclination when applying the law. Individuals who engage in civil disobedience must be ready for the legal consequences of their actions.

In 1848, American renaissance writer Henry David Thoreau coined the term civil disobedience to validate his refusal to pay state poll tax his government imposed on carrying out war with Mexico and enforce the fugitive slave law. In his essay, Thoreau opined that only a very few people heroes, martyrs, patriots, reformers in the best sense, serve their country or community with a conscience, and essentially resist the pugnacious social order. Unfortunately, society treats such patriot as enemies.

History bears favorable testimonies to the successes of civil disobedience in the reassessment of society's moral parameters. The resistance to British rule in India led by Gandhi, positive action in Gold Coast led by Nkrumah, the civil rights movements in the USA led by Martin Luther King Jr, the resistance to the institutionalized apartheid system in the Republic of South Africa, the democracy movement in Myanmar [Burma] led by Aung San Suu Kyi are all civil disobedience in the world. Like Henry David Thoreau, discerning Ghanaians will ask one day that is it legal to pay tax to support one family or one tribe in Ghana?

President Akufo-Addo is commissioning finished projects in his Akyem part of Eastern Region and busily cutting sod in the Ashanti region, after borrowing 400 billion cedis, out of which 4 billion was used to fund free senior high school [SHS]. What happened to 396 billion cedis? According to the vice president Dr. Bawumiah, that colossal amount was used for the toilet for all projects. Even the most notorious drug cartel in Columbia, Pablo Escobar built free schools for his community. No one can use Free SHS to compensate for corruption.

Indeed, journalists are expected to be watchdogs and act apolitically in order to suck out all the marrows of citizens’ lives. Gradually, journalists’ reputations in Ghana have lost much of their illumination due to partisan influence. Professor Jane is a 67-year-old resourceful woman who could be on retirement and academic contract with UCC. Captain Smart neither has detail information about the terms of her agreement nor her instructional mode [it could be online]. Yet, he opened his buccal cavity wide to denigrate Professor Jane that she is still withdrawing salaries from UCC. How could you say this Mr. Smart?

A good and respected journalist like Paul Adom-Otchere also came up with a wonky quantitative analysis. "When the variable in the equation has not changed…the constants in the equation is Ghana and politics, elections in Ghana…when you have an equation whose variables don't change; that's an interesting equation."He said perhaps Prof Opoku-Agyemang did not understand the question she was asked about the free SHS because she had criticized the incumbent party for rolling the policy out ‘en masse’.

If Paul cares to know, in some cases, variables in the equation can be manipulated or controlled to influence the outcome. I challenged Adom-Otchere to go to the streets of Mumbai and New Delhi in India to witness individuals with master’s degrees hawking beef on the road. It is because India failed to expand her formal sector that is smaller than the informal sector. Paul what will motivate a high school student who sees his senior brother at home without a job after many years of lofty credentials from the University of Ghana to study harder?

These are critical questions a journalist should ask rather than using your platform to defend a gaudy populist policy. President Akufo-Addo quickly referred the Airbus case to the Mr. Martin Amidu for investigation. What about the money laundering scandal in Belgium?

A journalist must strive to be neutral and keep officeholders on their toes to toes to conduct their office in a manner that will inure to the benefit of all! NPP political popinjays and juggernauts masquerading as Journalists must stop their Professor Jane's fault-finding mission.

Your quest to harmonise our country's religious diversity co...
16 minutes ago