A-Plus Is Directed By His Belly, He Lacks The Ability To Be Truthful 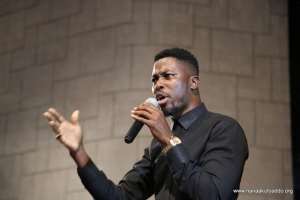 Kwame A-plus is one of the few people who have taken off their masks in an attempt to bring down Nana Addo Dankwa Akufo-Addo with no reason behind their actions. The only reason we can make out of his hatred for Nana Addo is because he was not allowed the chance to be corrupt as he wanted to be.

He is willing to jump to everything that has been designed to soil this government when he knows the truth is opposite the direction he has chosen.

He has since his attempt to distract the NPP stated various reasons why he is doing so and it's funny why he initially got people's listening ears thinking Akufo-Addo may fall because of his actions.

He first used the dismissal of the former CEO of Korle bu as an excuse because he said Dr. Anyaa was a good man to him and gave him money from time to time and his dismissal cut his freebies.

He, later on, took on the government because his bid for a contract with the BOST could not fall through. And quickly decides to create a movement that will be used to extort money from other political parties for being a movement that will direct which party wins power only to be revealed to Ghanaians that he had taken money to embark on that activity to the benefit of the NDC.

Ghanaians have been fooled for long and we have come to terms of what miscreants like A-plus can do to sway attention and fill their bellies at the expense of the good of the people.

The Akufo-Addo administration has done tremendously well for the people of Ghana and his policies, projects and programs speak so well of him so that any attempt to discredit same is served to the dogs.

The 4more4Nana agenda is on course and no one can destroy the plans of God concerning the country and His Excellency Nana Addo Dankwa Akufo-Addo.

May The God Lord Bless Us All.