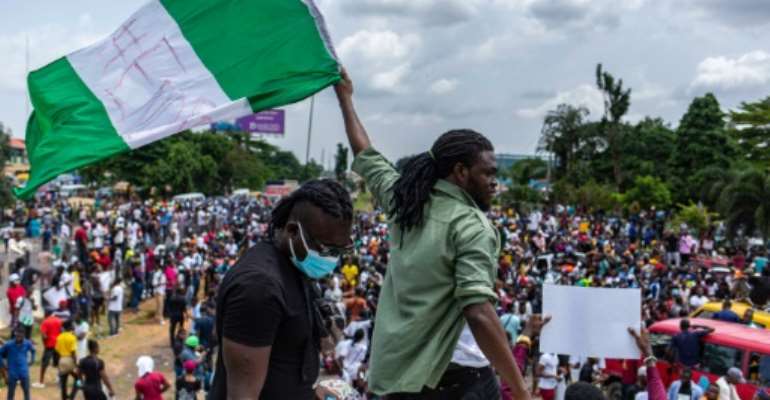 Frustration is running high among Nigeria's youth as they face the brunt of abuses as well as a lack of opportunities. By Benson Ibeabuchi (AFP)

Demonstrations against police violence raged on in Nigeria's main cities on Wednesday, with unidentified men in the capital Abuja targeting protesters by hacking their vehicles with machetes according to witnesses.

Anger over abuses by the police's notorious Special Anti-Robbery Squad (SARS) erupted onto the streets earlier this month, forcing the government to announce they were scrapping the unit as part of wider police reforms.

The authorities pledged a raft of measures including the release of demonstrators from custody and the setting up, within a week, of an independent body to probe violations.

The government has also acted on a demand to provide psychological evaluation and training to disbanded SARS officials prior to their re-deployment.

But frustration is running high among Nigeria's youth who face the brunt of abuses as well as a lack of opportunities, and many insist they will keep protesting.

Several hundred people were gathered in Abuja on Wednesday when witnesses said they were attacked.

"A group of boys, maybe 30 of them, 16 to 20 years old, clearly high on drugs, arrived and started destroying our cars," 28-year-old Esther Jonathan told AFP.

Human rights activist Aisha Yusufu said paying thugs to crack down on protestors was a known tactic in Nigeria.

"This is something they did to us before," Yusufu told AFP. "They attacked us in 2014 under the watchful eyes of the police, and that is what they have done again in 2020."

In Ikeja, in Lagos state, several witnesses said that men with machetes and axes attempted to attack demonstrators, but were stopped and handed over to the police.

The police inspector general said that a new Special Weapons and Tactics (SWAT) team would "fill the gaps arising from the dissolution of the defunct SARS".

The announcement, which followed a closed-door meeting, was met with scepticism, and the hashtag #EndSWAT quickly started trending online along with #EndSARS.

Amnesty International documented at least 82 cases of torture, ill-treatment and extra-judicial execution by SARS between January 2017 and May 2020.

A youth holds up a sign reading "Am I Next?". By Benson Ibeabuchi (AFP)

The government's move to scrap the unit has been a rare concession to popular protests in a country dominated by an entrenched ruling elite.

The United Nations resident coordinator in Nigeria, Edward Kallon, welcomed the government's promises but warned on Twitter: "The process may take time. I appeal to the youth to remain peaceful."

Meanwhile, hundreds of people huddled in the beating rain outside a key toll gate in the sprawling economic hub of Lagos -- where protesters have blocked traffic since Monday -- as they sought to keep up pressure for change.

"Half of my staff have been harassed (by police) in the past two years," restaurant owner Aderonke Bamgbade told AFP.

"We need to reform the police and Nigeria as a whole. We can't sit in the confort of our homes and complain anymore."