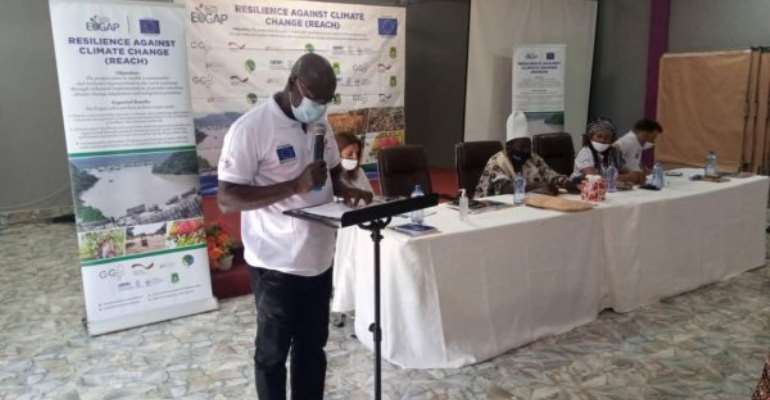 The Northern Savannah Zone of the country is witnessing serious effects of climate change such as increase in average temperature, changes in cloud cover and precipitation leading to flooding and prolonged dry spells affecting agriculture production and productivity.

This came about as a result of the continued rising of fossil fuel burning, land use changes and increasing greenhouse gasses into the atmosphere, thereby causing a rise in the amount of heat from the sun withheld in the Earth's atmosphere , hence the rise in temperature.

Mr Emmanuel Sasu-Yeboah, the Upper West Regional Director of Agriculture said this during the opening of a two-day stakeholder engagement workshop in Wa to share the results of a socio-economic and gender baseline survey by the European Union Resilience Against Climate Change (EU-REACH) Project.

He noted that conventional farming practices such as continued use of inappropriate tillage implements, deforestation through lumber exploitation, charcoal burning, and bush burning among others contributed significantly to climate change with its associated effects.

“This way of farming is unsustainable ecologically, economically and socially and has resulted in floods, soil erosion, loss of soil fertility, prolonged dry spells during the farming season, rural migration, poverty, and social conflict”, he added.

Mr Sasu-Yeboah noted that the solution to these problems was to change from the conventional ways of agriculture to the use of appropriate conservation agriculture, which was more resilient to climate change and its effects.

According to him, conservation agriculture was notably based on slash and no burn, reduced or completely zero mechanical tillage, soil cover crops or mulch and crop rotation especially cereal and leguminous crops.

He noted that it was for this and many other reasons that the REACH project was developed and had been working around the clock to facilitate adaptation and mitigation of climate change impacts within the Northern Savannah Zone of Ghana.

The workshop, Mr Sasu-Yeaboah noted would afford stakeholders the opportunity to provide the needed inputs into the formulation of SMART indicators based on the results of a socio-economic and gender baseline study.

He explained that the baseline survey sort to contribute to stakeholders' understanding of social transformation interventions that would promote sustainable and inclusive rural development, climate change adaptation and mitigation practices in the Upper West Region and the entire Northern Savannah Zone.

Naa Dikomwini Domolae, the Paramount Chief of the Daffimah Traditional Area, noted that climate change had become challenging the world over as water tables had reduced and dependency on the natural rainfall now was not certain.

“There is therefore the need to look for more innovative ways in tackling this uncertainty, as this project seeks to achieve, if successfully implemented”, he said.

Naa Domalae noted that traditional authorities in the region have over the years been sensitizing their subjects to desist from bush burning, cutting down economic trees such as Shea for charcoal, and rosewood, adding they would as well partner the Assemblies to enact by-laws to penalize offenders.

Haala Kuoro Hajaratu Limann, Paramount Queen Mother of the Gwollu Traditional Area noted that most women depended on the Shea tree for their living and appealed to the implementing partners to assist develop the Shea sector by creating the right market for buyers.

“I believe if this is done it will empower women and boost their participation in the economy of the region and Ghana at large”, Haala Kuoro Limann who is also the President of the Upper West Queen Mothers Association said.