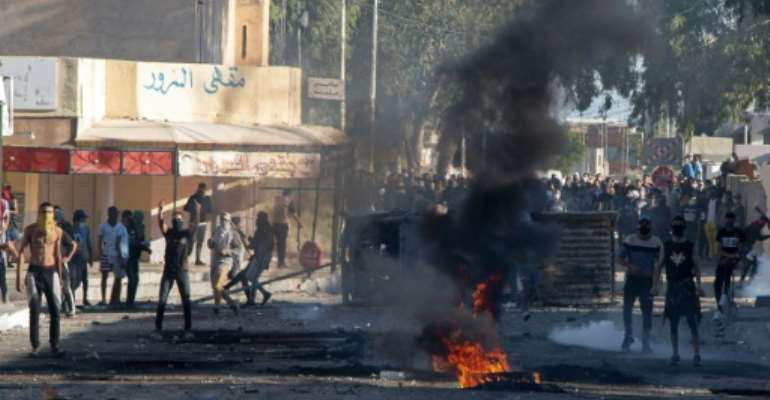 Tunisian protesters take to the streets of the impoverished town of Sbeitla after a man died when authorities demolished an illegal kiosk where he was sleeping. By MOHAMED ZARROUKI (AFP)

Tunisia announced Wednesday the arrest of a municipal police chief after protests in an impoverished town sparked by the death of a man during the demolition of an illegal kiosk.

A day after the angry demonstrations in Sbeitla, the situation was calm as security forces were deployed throughout the town in the central province of Kasserine, an AFP correspondent said.

Early on Tuesday, municipal police demolished the shop in a working-class neighbourhood of Sbeitla, killing a man who had been sleeping inside.

The death triggered protests by residents who blocked roads, set fire to a municipal vehicle and threw stones at police in Sourour district, according to the interior ministry.

The owner of the kiosk, Oussama Khachnaoui, also son of the victim, said he had not been warned of the demolition, and that the demolition went ahead without checks to see if anyone was inside.

Since then, officials have traded blame over the incident, and many internet users have demanded that those responsible be prosecuted.

The state was criticised by some for only applying the law against the poor while allowing the corrupt to go unpunished.

The judiciary announced the arrest of the head of the municipality's police on Wednesday.

Prime Minister Hichem Mechichi decided to sack him following the dismissal of the prefect, sub-prefect and a security official in the region.

The police chief was placed in custody as part of a homicide investigation, the spokesman for the Kasserine court and deputy attorney general, Riadh Nouioui, told AFP.

Internet users published a copy of the decision to demolish the kiosk at 3:00 am on Tuesday. The document was signed by the municipal police chief.

Sbeitla is situated in Tunisia's economically marginalised centre, which has often seen protests in the past over lack of jobs and investment.

Young people turn to selling newspapers and bread on the informal market in order to support their family's incomes while out of work.