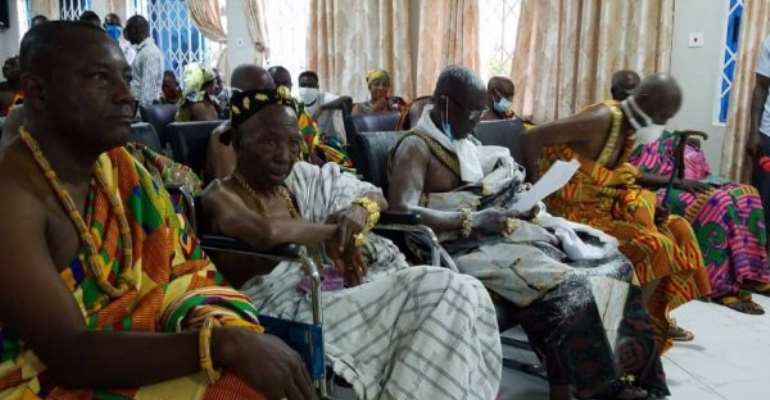 Nana Mprah Besemuna III, Krachiwura says the successful constitution of the Oti Region House of Chiefs marked the full realisation of the Region's quest for independence.

He thanked President Akufo-Addo for powering their dream and asked that those who dedicated themselves to the course were granted their due appreciation.

The Krachiwura said it in a victory speech after he was elected President of the recently constituted Oti Region House of Chiefs at Dambai.

Nana Soglo Alloh, Paramount Chief of Likpe Traditional Area, and immediate past President of the Volta House, contested with him.

The Krachiwura polled 10 of 14 votes cast.

“Today marks a great day in the History of our struggle for the creation of our dear Oti Region, because the successful election of the Oti Region House of Chiefs' President and Executives, as it were, puts the final seal to our separation and independence from the Volta Region as formerly constituted.

“I humbly dedicate my election as President to God Almighty for making this happen in His own good time. I further dedicate this victory to the President, Nana Akufo Addo who for his vision, courage, resilience, and tenacity of purpose Oti Region would never have been created.

Nananom in my area, we have a proverb which says that “obi ndidi ma na were mfi ogya”, literally meaning “no one eats his fill and forgets about the fire, which made the cooking of the meal possible.

Let us therefore constantly remember the fire that made the cooking of the meal possible and show the appropriate appreciation,” he said.

Nana Besemuna said the mandate was a show of appreciation for the efforts of the Joint Consultative Committee (JCC) on the creation of the Oti Region, which he headed and promised to work with all in unity, towards the development of the Region.

“I am sure that my election today is in the recognition of the Key Role I played in the struggle for the creation of the Oti Region. I am fully conscious of the fact that whatever I did was with your unflinching loyalty and support.

“I promise to promote consensus building and foster unity among us, as custodians of the land, tradition and culture for the development of Oti Region,” the Krachiwura said.

He paid glowing tribute to chiefs and other members of the JCC, who actively fought for the independence, and said a “befitting memorial” would be erected for the late Dr Kweku Addeah, Secretary to the Committee, “who spent sleepless nights bringing together our various petitions and stoutly defended our course.”

Nana Besemuna gave the assurance that all pending gazettes and litigations in the Region would be resolved, and called on stakeholders to help to constitute a full House.

I haven’t said NPP is Majority in Parliament – Bagbin clarif...
14 minutes ago