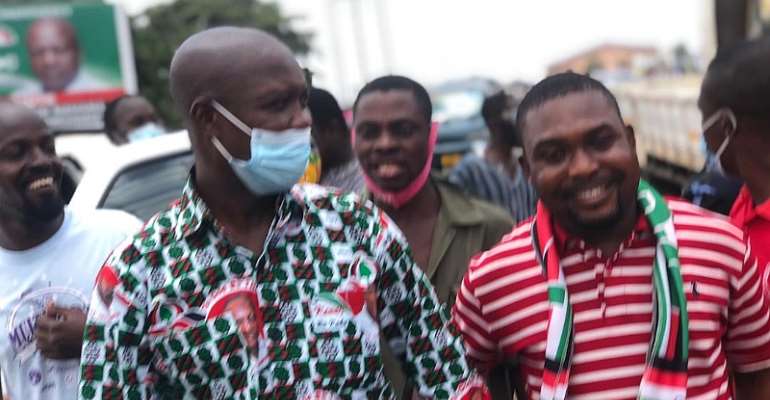 Flags of the opposition National Democratic Congress are all over electric poles on all major streets in Wute in the Akatsi South Constituency of the Volta Region as the party gets ready for their Zonal campaign launch at the Wute EP Church park this Sunday, 18th, October 2020.

The Constituency Organizer of the Party in the Akatsi South Constituency, Sulleyman Sulley has been at the venue ensuring hitches to the program, if any, were reduced to the barest.

At the time of Filling this report in the Wute Township, young men were seen still mounting posters on poles and Walls.

The longest-serving Constituency Secretary of the party in the Akatsi South Constituency of the Volta Region, Hon. Daniel Dagba who confirmed this said the enthusiasm among the people in the Constituency and the venue was encouraging.

He said it was an indication that all is not well with Ghanaians under this Nana/Bawumia-led Government and the People's Manifesto of the NDC is the real solution to Ghanaians' plight under this ineptitude, tyrant, visionless and useless government.

He said, though the campaign launch is just a Zonal one and the expectation was to see only the branch Executives from all the 125 polling stations across the Constituency, because of how wicked, clueless and corrupt this Government is to the people of Ghana, the Party was expecting about 3000 people at the launch.

"This government has made the country insecure because of how the ruling party has exposed the state security fibre or setup to their party hoodlums. How can a mere party hoodlum threaten police at Asawase polling station to leave the scene if not he would shoot the police officer with the video going viral without that hardened NPP guy been arrested, prosecuted, and jailed to serve as a deterrent to other criminals? This government has worsened our security situation even with the gargantuan appointments of security apparatus," he added.

The Wute Zonal campaign will be launched on the theme "the people's Manifesto", at 2:00Pm and is expected to highlight the achievements of the party in the previous Government and what the party intends to do for Ghanaians if given the nod on 7th December 2020.

Speaking to the Assemblymember of the area, Hon. Wisdom Akpabli has assured the party of his readiness to host the Zonal Campaign launch in his electoral area and promised to make the safety of the electorates a priority before, during, and after the campaign launch.

The Assemblymember reiterated that The ruling New Patriotic Party apart from shouting 4More4Nana has no other campaign message for the run-up to this December polls.

He continued that, the country only witness a high level of corruption, nepotism, insecurity, excessive borrowing with very little or nothing to show, collapsing of indigenous businesses, misuse of state security apparatus, create, loot and share public funds, money laundering, thievery, and daily scandals since January 2017 and the NPP is yet to give the Akatsi South Constituency, the Factory, the Dam, the Zongo Development Fund and others they promised prior to the 2016 General elections.

Akufo-Addo's response to Aflao Chief was wrong; he must apol...
40 minutes ago

NIA suspends registration at GRA, RGD from October 25
42 minutes ago