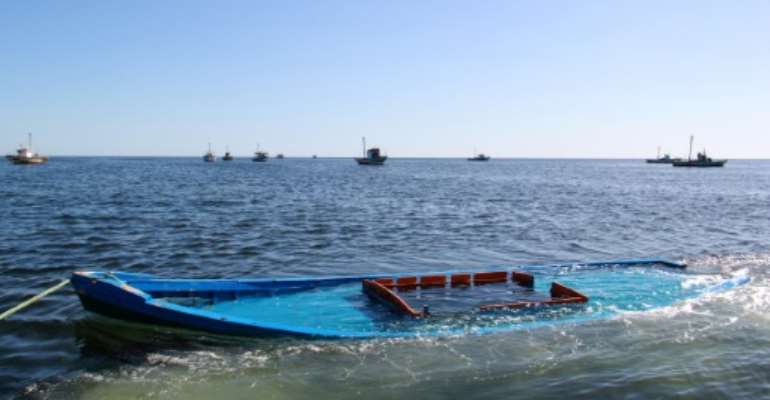 A picture taken on October 13, 2020, shows the boat that sank off the coast of Tunisia over the weekend, being towed near the coastal town of Amra. By HOUSSEM ZOUARI (AFP)

A migrant boat sinking off the coast of Tunisia over the weekend left at least 21 people dead, a court said Tuesday, after four more bodies were found.

Seven survivors were rescued on Sunday and a total of 17 bodies have now been retrieved.

Turki had previously said that the boat had been carrying 29 people, including two Tunisians and people from various sub-Saharan African countries.

Among those drowned were three children, including a baby less than six months old, as well as seven women aged between 20 and 30, and the two Tunisian men.

"Most of the passengers knew each other, some had been working in Tunisia for several months," Turki said.

The interior ministry had said it foiled 32 attempts to cross the Mediterranean and arrested 262 people between Saturday night and Sunday morning alone.

The International Organization for Migration said that many Ivorians, including women, had been trying to leave Tunisia this summer as they struggled to find work in the North African country.

At the risk of their lives, thousands of migrants regularly attempt to cross the Mediterranean in clandestine boats, trying to reach Europe where they hope to find work and better lives.

Since the start of 2020 until mid-September, more than 8,500 people have been intercepted trying to reach Europe by sea from Tunisia, including 2,104 non-Tunisians, the ministry said.

The number of would-be migrants trying to cross to Europe from Tunisia has been on the rise since 2017, largely driven by economic woes in the North African country, almost a decade after a revolution that many had hoped would bring change.

Your insatiable taste to travel in another luxurious jet to ...
58 minutes ago