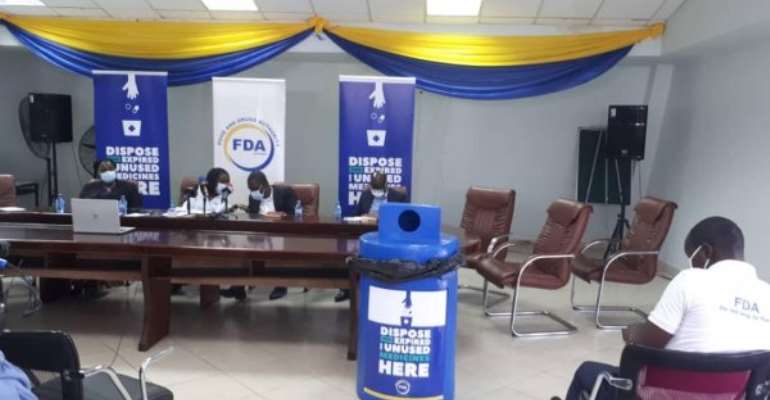 The Food and Drugs Authority (FDA) on Monday launched a pilot project in the Greater Accra Region to seize unused and expired medicines from all sources for their proper disposal.

The project, code-named: “Take Back Unwanted Medicines,” is expected to ensure that expired and unused medicines are safely disposed of, thereby promoting patient and environmental safety and minimising antibiotic resistance, which is a major concern for governments globally.

Mrs Delese Mimi Darko, the Chief Executive Officer (CEO) of the Food and Drugs Authority, said the project was being run in collaboration with the Community Practice Pharmacists Association.

She said a total of 50 Community Practice Pharmacists and pharmacies in the Greater Accra Region had been selected to take part in the pilot project, and they had been provided with safely located containers and bins where the public could drop their unused and expired medicines, which would be picked up regularly by the FDA for proper disposal.

Mrs Darko said it was anticipated that the amount of unused and expired medication had increased among the growing population as people continued to receive new prescriptions on daily basis from hospitals and other sources.

However, the absence of a publicly known and easily accessible means of disposing of such unused and expired medicines posed a big problem to the environment as some were often flushed down toilets, emptied into sinks and drains, or thrown into bins, and were washed further into water supply systems and the soil, she said.

The FDA Boss said some countries had reported traces of medicines including birth control, dietary supplements and antibiotics in plants and animals, and the situation may not be different in Ghana when tested, which posed great danger to the health of the country.

She said the project had been initiated to strengthen the enforcement of the Third Edition of the National Drug Policy and the Public Health Act, 2012 (Act 851), both of which had clear provisions for the disposal of medicines in a manner that protected the environment and ensure they did not return to the population.

Mrs Darko, therefore, encouraged the public to look out for the FDA's labelled collection containers on the premises of the selected pharmacies and pharmaceutical institutions in their communities to deposit their unused medicines.

“It is a good practice to periodically check any medicine that you do have in your home to make sure that it's still in date and hasn't been damaged,” she said, and that medicines with damaged packaging should not be used as their expiry could not be assured.

She called for massive support from stakeholders to ensure the success of the project and encouraged corporate institutions and industry to back the FDA with further assistance as part their corporate social responsibility.

She urged the media to help in increasing public awareness and education on the dangers posed by improper disposal of medicines.

Mrs Darko explained that the next phase of the project would include pharmacies and over-the-counter medicine shops in other regions based on the success of the outcome of the first.

The 1992 constitution is a tool for stealing, rigging and pl...
33 minutes ago