UW/R: We Were Promised Development Not Sod- Cutting Ceremonies- Tahiru Lukman to Akufo-Addo 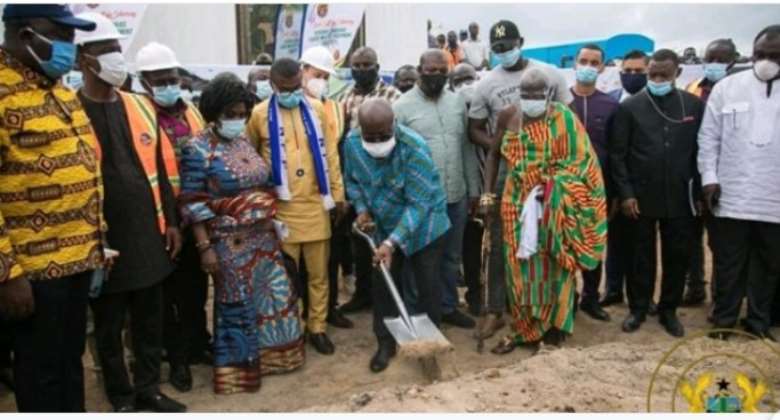 The ruling New Patriotic Party (NPP) presented the most ambitious manifesto in the run down to the 2016 elections. The flagship policy initiatives, including the one Village, One Dam; One District, One Factory; One District, One Warehouse; One Constituency, One Million Dollar. And the Free Senior High School Policy.

The NPPs' best performance in the Upper West Region came in the 2016 elections, as the party secured 5 seats out of the 11 seats in the Region.
Admittedly, the NPP would struggle to make a significant impact in the Upper West Region in election 2020. The party has failed to work hard towards consolidating its gains. From self-serving appointees to egoistic party executives. The leadership of the New Patriotic Party in the Upper West Region has taken the party to a ditch. The general outlook of the New Patriotic Party is worrying.
Besides, the Youth Centre; Toilet facilities and shea processing factory, including some and 'pounds' as One Village, One Dam initiatives, with few warehouses; the solar system in Lawra and Small Twon Water supply system in Hamile, the NPP cannot boast of any legacy project in the Upper West Region. The NDC government had contributed more to the infrastructural development initiative of the Upper West Region and still encountered the wrath of the people of the Upper West Region, then the NPP is out to face serious voter rejection in the Upper West Region.
While I have always commended the government of Ghana for granting the autonomous status of the UDS Wa and Navrango campuses, it is regrettable that the government has failed to prioritize the Upper West Region in most of its flagship projects. The visit of the president to cut sod of the Dikpe bridge is a vote-buying strategy designed to redeem the reputation of Hon. Anthony Karbo. Why would the good people of Lawra be given a promise to construct the Dikpe Bridge by their MP then-candidate, who later became a deputy road minister and after facing critique of non- performance and rejection now get the blessing of the president to cut the sod for the project? We must ask the question; two months into elections government is now beginning to deliver on its promise in the 2016 campaign season. We cannot allow politicians not continue to play to our intelligence.
The president has been engaging in a campaign of sod-cutting ceremony and this development is disturbing. What happens in the unlikely event the party losses power? Considering our negative government attitudes of not continuing most projects of previous regimes. Just because of the politics of infrastructure. While the water treatment plant and Dikpe bridge are very important and could help further improve sanitation and economic activities, respectively, the timing is not what the good people of the Upper West Region should be happy of.
It however understandably that, in terms of project planning or executing infrastructural projects, the rituals of sod-cutting are a precondition. Nonetheless, considering the timing, it appears the government wants to give us renewed hope to trust and have confidence in his administration.
We have always been taken for granted by politicians and this trend of development would not change unless the good people of Upper West demand more from political leadership. We must prioritize development, track record, and competence, and not vote based on party colours and solidarity. The performance of the NPP in the Upper West Region is the betrayal of the trust of the people of the Upper West Region. The sad situation is the alternative (NDC) cannot be trusted either, haven dominated in time past.
Author; Tahiru Lukman
Youth Activist, Dev't Consultant & Pan- African Author
Email: [email protected]