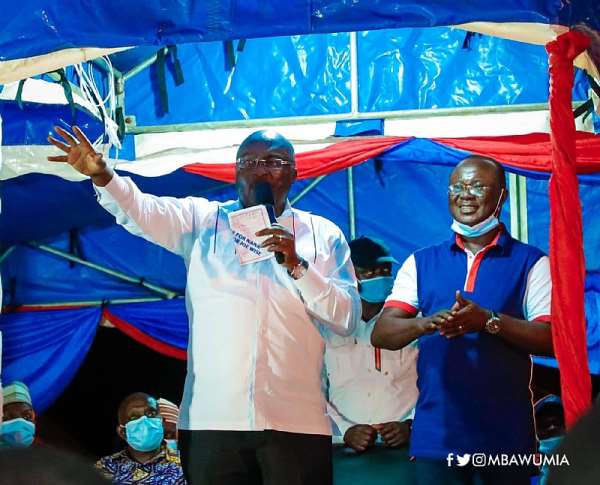 There have been intensified efforts by the leadership of the ruling New Patriotic Party (NPP) to get constituents to vote against members of the party who are contesting in the upcoming elections as independent parliamentary candidates.

Some NPP leaders who addressed a durbar of chiefs and people in the Bekwai constituency called on NPP supporters to vote against the independent parliamentary candidate in the area, Akwasi Amofa-Agyemang.

Akwasi Amofa-Agyemang declared his intention to contest the 2020 parliamentary elections as an independent candidate for Bekwai after he was disqualified from contesting allowing the incumbent, Joseph Osei-Owusu, who is also the First Deputy Speaker of Parliament, to run unopposed.

The Ashanti Regional Chairman of the NPP, Bernard Antwi Boasiako, who alleged the NDC was supporting the independent candidates said he will ensure the candidate fails in his attempt

Speaking at the same event, Vice President, Dr Mahamudu Bawumia said a vote for an independent parliamentary candidate is a vote against the NPP.

Asokwa and Ahafo-Ano-North are other constituencies with independent candidates threatening the NPP.

He called on constituents of Bekwai to vote to retain the incumbent Member of Parliament, Joseph Osei Owusu.

“You can all testify of the development here in Bekwai as a result of the hard work of Joe Wise. Roads, water, hospitals, clinics, CHPS compounds – all these he has done for you because he has worked on your needs.”

“Your Member of Parliament is a good man so you should retain him. We don't want any business of an independent candidate at all,” the Vice President said.

President Akufo-Addo, the NPP flagbearer, has also urged his party members not to vote for members contesting the upcoming elections as independent candidates.

In an earlier address in the Ashanti Region, he said such moves were “a sign of disrespect and anyone who doesn't respect me cannot work with me.”

The NPP has put in place a national reconciliation committee to engage aggrieved candidates going independent.

“We continue to talk to them. Some have stepped down. We are also still talking to some and I am confident that at the NPP at the end of the day will make headway when we have these small disputes,” the NPP National Organiser, Sammy Awuku, indicated in September.