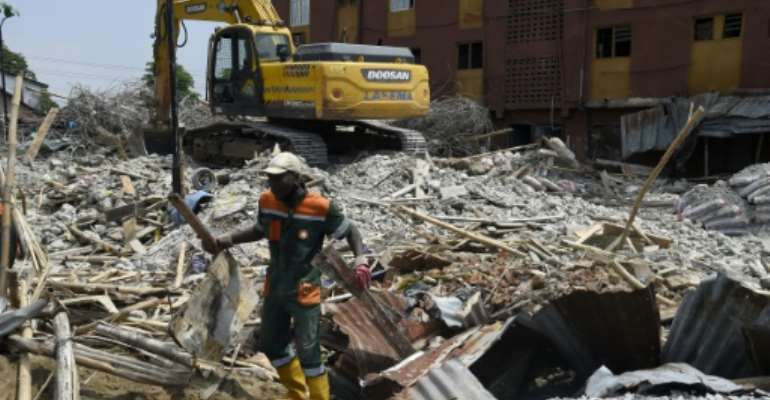 Building collapses are common in Nigeria, where millions live in dilapidated properties and construction laws are routinely ignored. By PIUS UTOMI EKPEI (AFP)

Emergency services were clearing debris of a collapsed building on Monday in the densely populated city of Lagos in Nigeria that left at least eight people dead.

The cause of the incident, which happened on Sunday, remains unknown but building collapses are common in Africa's most populous country, where millions live in dilapidated properties and construction laws are routinely ignored.

Dozens of people were helping with the clearing operation, with many victims believed to be trapped in the rubble.

"When the building started falling down, no one was able to flee. No one," one witness, Femi Abalenawa, told AFP.

"Emergency services didn't arrive for a while, and so people in the neighbourhood came out to help," he added.

Ten people were severely injured and taken to hospital, while 10 others were lightly injured, the agency added.

The incident happened at a building under construction in Ikoyi-Obalende, a working-class area of Lagos.

"The cause of collapse is yet to be ascertained but efforts are presently ongoing by LASEMA and other responders towards salvaging the situation," the city's emergency services said.

In March, 20 people died in the collapse of a building housing a nursery and primary school in Lagos, which is Nigeria's economic hub.

MPs split heads as anti-LGBTQ+ bill to be laid in Parliament...
13 minutes ago

Angola President in Ghana for 3day visit
18 minutes ago